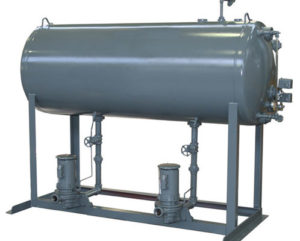 This article was originally published by Steve Almgreen of the Bell & Gossett Steam Team.

Here is a steam system with a recently installed boiler feed unit where the owner was surprised to see a dramatic increase in makeup water use. Investigation showed the feed water was being lost through the unit’s overflow a few times a day.

It turned out the owner had replaced a very old boiler with one offering the same capacity. So far, so good. But as long as they were replacing the boiler and related piping, they also decided to abandon the system’s vacuum heating unit and install a new boiler feed unit. Their boiler guy, unaware of the abandoned vacuum unit, provided what the customer requested: a unit sized to the boiler.

One benefit of vacuum heating units is increased differential pressure between the positive pressure of the boiler and the sub-atmospheric pressure in the unit’s condensate receiver. This increased differential moves steam through the system quickly; the steam doesn’t have to push air out of the way. The vacuum heating unit also allows for smaller pipes, located where you wouldn’t normally put them…like below grade. The vacuum can lift condensate out of wetted returns—but without the vacuum, that condensate returns only when the static pressure before wetted returns increases to a sufficient amount to push water through by the weight of the column of water.

So the building was taking longer to heat because of piping restrictions and lack of increased differential pressure. In turn, either the new boiler feed unit or the feeder on the boiler itself had to add water to keep the boiler steaming as the steam slowly made its way to the end of the system, condensed and came back. Plus, the new, modern boiler lacked the old boiler’s large water chest, since today’s higher-efficiency boilers use significantly less water.

In short, everyone missed a system sizing component. Boiler feed receivers should be sized to handle the condensate volume equal to the system lag time. Without the old vacuum, lag time increased. But once heat was established and the boiler shut down, all the extra makeup water was condensing and being returned. Since the boiler didn’t need more steam, the feed unit didn’t feed. The extra makeup water from the beginning of cycle was being returned and running out the overflow to the drain. When the boiler started up again, so did the whole cycle.

Advice For the Future

Rather than taking things at face value and swapping a 300 horsepower boiler for a high-efficiency 300 horsepower boiler, the owner and provider should have looked at the entire system—keeping in mind the benefit lost when the vacuum unit was removed. You can determine system lag time by observing the actual time required for condensate to begin returning once the boiler has begun steaming. The system time lag volume is the amount of condensate developed by the system during the timed period. A five-minute storage is fairly typical for systems up to 200 BHP, or 6,900 lbs. per hour. Larger systems should have 10 minutes storage or more.
Remember also that system lag time is greater for a single-story building or a multi-building complex than for a single multiple-story building.

An undersized boiler feed receiver leads to condensate overflow upon system shutdown. Steam in the system condenses and returns to the receiver at this time. It’s best to retain this condensate; it contains heat and is as pure as distilled water. Therefore, size the receiver to contain the condensate without overflow. Oversizing the receiver won’t cause any system problems, but initial costs are higher. This is eventually offset by the preservation of condensate, reduced chemicals to treat the system, and less fresh water required for makeup.

At R. L. Deppmann, we understand steam systems and can help you design or troubleshoot the system you are involved with. Please give us a call.