The “float and thermostatic,” or F&T, steam trap uses a float and lever system to operate. It also employs a thermostatic element. The following is a photo representation of the F&T trap from the Xylem Hoffman Specialty Technical Manual TES-375A. 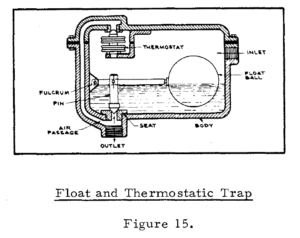 Very early in grade school, the IHM sisters taught me that no two things can occupy the same place at the same time. At first, this simply meant two students could not sit in the same place as we fought for the desk we wanted. Later, this was applied to science classes. Steam heat exchangers are subject to the same rules. In order for steam to enter the heat exchanger, we must remove the air. The large volume of air in the heat exchanger shell that’s present when the steam control valve opens must push through the trap in order for steam to enter the shell.

The cutaway detail of one Hoffman F&T steam strap is shown below. Notice that the thermostatic bellows is internal to the trap. If the bellows fails open, steam will pass through the opening to the outlet. This will waste energy and possibly cause steam hammer in the condensate return pipe. 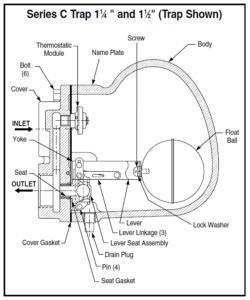 If the thermostatic bellows fails closed, air will not be vented and there will be improper heating. There are simple checks for the heating technician in the Hoffman installation, operation, and maintenance manuals. Visit our product page of the website for links to these manuals.

One final note on thermostatic vents in F&T steam traps. Larger (2-1/2”) traps have an external vent. The vents open and close when the temperature control valve cycles. It will spit vapor during the cycles. It may leak a bit when closing and if it fails open or debris is present, steam may escape. These vents should be piped to the gravity return pipe. If this is not possible then the vent pipe should go to drain with a piping seal trap. 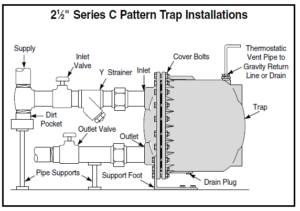 We select the Float and Thermostatic trap for our heat exchanger example because we have a modulating control valve. The advantages of this trap in this application are fast venting of air using the thermostatic vent and continuous modulation of the trap. Removing air from the trap is critical to proper operation with cycling applications. If the air is not removed, the condensate cannot enter the trap and we may back up condensate into the heat exchanger causing damage to the tubes. Modulation is important because this application has a wide variety of capacities from design all the way down to a couple percent of design load.