When discussing steam heating and steam heat exchanger basics, an important component for proper operation is the steam trap. At times, it feels like steam trap selection and sizing is more of an art than a science. Appearances aside, there is a great deal of science behind the selection, sizing, and piping of steam traps. Over the next several weeks we will examine the science of steam trap sizing. 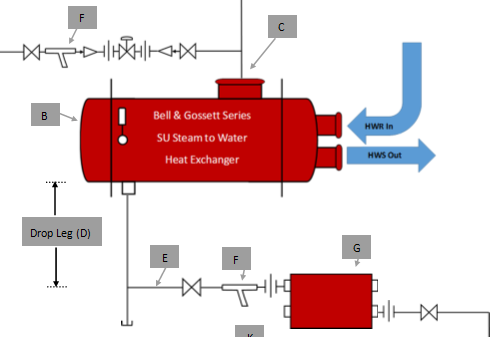 Before the start of this week’s blog, I need to mention a correction from last week. In a true “snafu” moment I subtracted 600 from 4300 and decided it was 5700. No amount of new math will make that correct so I went back and changed the PRV2 selection from 5700 PPH to 3700 PPH. If you go to last week’s Monday Morning Minutes, it is corrected.

What is a steam trap?

Our industry uses fairly simple names for products. A steam trap does exactly that: it traps steam. When steam flows into the steam heat exchanger shell side we want the steam to condense and give up its latent heat before the leaving the shell as a liquid called condensate. We need to trap the steam in the heat exchanger or coil until it condenses. Once the steam has condensed, we must remove it quickly. Regardless of the style of steam trap, that’s their function: the first job of a steam trap is to recognize when steam is present, trap it, and then quickly remove condensate when present. Whether the steam trap is a “float and thermostatic”, “inverted bucket”, “thermostatic”, or “thermodynamic”, that is what they do.

How does a float and thermostatic (F&T) steam trap work?

The “float and thermostatic,” or F&T, steam trap uses a float and lever system to operate. Let’s look at how the “float” portion of the steam trap works. The following is a photo representation of the F&T trap from the Xylem Hoffman Specialty Technical Manual TES-375A. These steam traps are normally closed devices. Let’s look at how they work. I promise you, after reading this, there will be a valuable takeaway for engineers, contractors, and owner-operators. 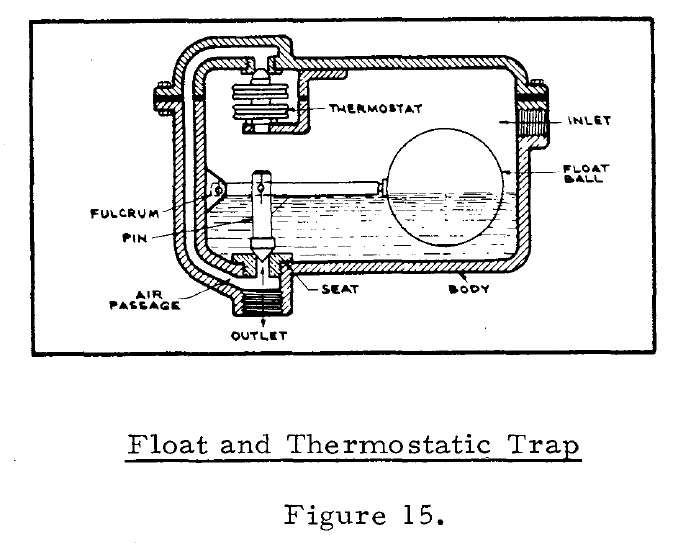 The closing force of the trap starts with the differential pressure. This is the inlet pressure minus the outlet pressure. That difference is trying to keep the steam trap closed. The pin is seated by the force exerted due to the weight of the float given the length of the arm.  The buoyancy of the float along with the length of the float rod provides the force to overcome the pressure differential and start to lift the pin off of the seat to start the condensate flowing out of the trap. As the condensate rate into the trap increases, the float rises more, exposing more of the opening which allows the condensate discharge rate to increase. This is why these traps are referred to as modulating traps and are ideal for modulating control applications. Here is a small screen shot of the Xylem Hoffman F&T trap selection table.

What happens if the inlet pressure is greater than the F&T trap rating?

As stated above, the float weight, lever length, and seat diameter are all selected to overcome the pressure differential expected. If the pressure differential is greater than expected, the trap will not open. This is true of most steam traps including inverted bucket traps. This will cause lack of heat and possible damage to equipment as the condensate continues to back up. If a float and thermostatic steam trap is not allowing condensate to pass, the technician should verify the steam pressure versus the design pressure of the trap. Also, if a steam trap float has collapsed, it will not be buoyant enough to open the trap. F&T steam traps fail closed. If you want to see the calculations, click here and send us a request for the calculations supporting statement in part 8 of the steam series.

Next week the R L Deppmann Monday Morning Minutes continue with the operation of the thermostatic portion of float and thermostatic steam traps. We will also provide more information about field troubleshooting of steam traps.