What Is A Steam Condensate Return Unit And How Is It Sized? 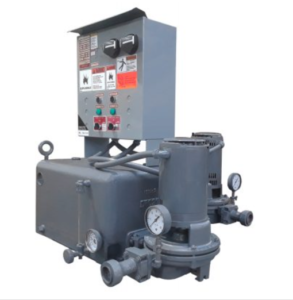 We normally do not use steam for comfort heating when designing a system today. Other than old steam heating systems, we use steam for building humidification systems, sterilizing systems in health care, and process. The engineer and contractor working on these systems should understand the basic difference between condensate transfer and boiler feed systems. Today, we’ll look at the condensate unit.

Most condensate units have two pumps so there is a standby pump. When using two pumps, there is normally an alternator for the pumps. In addition to alternation, there can be two floats or a two-level mechanical float alternator with a higher level sensor so if the pump cannot keep up, the second pump comes on.

The receiver or tank on a condensate unit is designed to be as small as possible. Most units utilize the traditional constant speed on-off pump operation. The receiver is sized for about 45-60 seconds of storage. The pumps are sized for two times the condensing rate. This will allow the pump to operate for at least 20-30 seconds on and 30-60 seconds off under the highest capacity of the served terminal units. 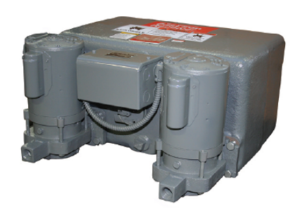 The pump discharge pressure is a combination of elevation, friction loss, and any expected back pressure along with a healthy safety factor. This is an entire subject on its own and I will not go into detail here.

Here is an example. Assume there is a steam heat exchanger system with a capacity of 3000 pound per hour (PPH) capacity. This is a modulating steam control system, so we do not want to lift out of the traps. We need a condensate unit. What is the pumping rate and receiver capacity?

I can look at several Hoffman or Domestic condensate units. Start with the low-cost Hoffman watchman series.

Although this is bigger than needed, the balance valve installed on the discharge of the pump will throttle the pump so the pump will pump 20-30 seconds. The off cycle will be a bit longer.

This system is inexpensive, in stock, and simple. This unit is available from many fine wholesalers in our territory. What if the owner wants more controls? What if we need a control panel with more options? Then we change to a feature laden Domestic condensate unit.

Let’s take the same example as above but assume the discharge pressure is 40 PSIG. The owner also wants a high-level alarm with contacts to the building management system (BMS). Further assume the owner wants pump suction shutoff valves so they can remove the pump to work on it while keeping the system online. This has many more options than the standard Hoffman pump selected above.

The sizing rules are the same. Look at the Domestic model CC condensate unit literature.  Here is a snip from the catalog. 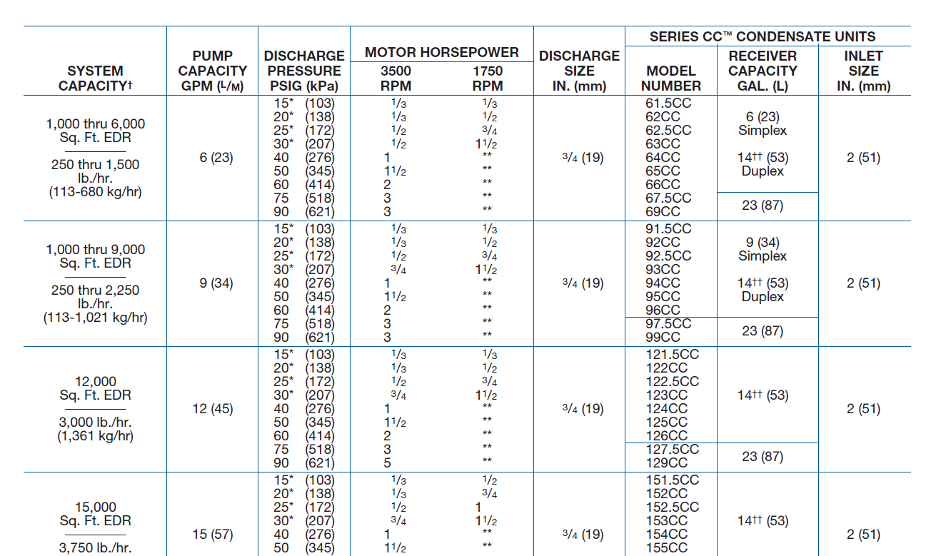 The pump capacity is 12 GPM. The pump discharge pressure is 40 PSIG. The receiver size is 14 gallons. Now the pumps are 1 HP due to the increase of discharge pressure required in this example #2. This will clearly require three-phase motors and we now need motor starters. Assume the electrical service is 460/60/3. The model selected is Domestic 124CC. This is just one of many possible models of condensate units.

The Northern Ohio engineer contacted R. L. Deppmann for a selection. The engineer received a specification, schedule data, installation detail, and a CAD file. They also received this summary. 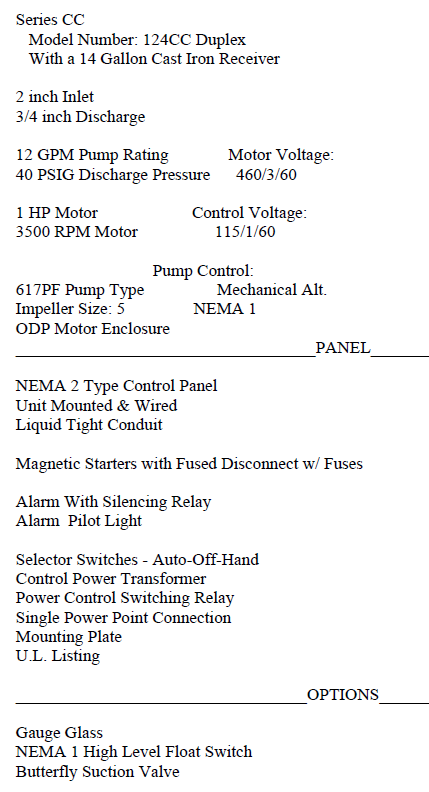 Notice I added some things that were not asked about. Gauge glass for a quick observation of the operation. I added electrical components to keep the controls at 115 volts. I added a power control switching relay so the system would operate if one of the pump starter power circuits was offline for service. Included is a master fused disconnect and a silencing relay, so the alarm bell is not ringing constantly once the owner is alerted.

The R. L. Deppmann Core Purpose is to “Help people make better decisions”. Selecting and explaining some of the chosen options above allows the engineer to make a better decision for their client.

We could add an inlet basket strainer, a receiver thermometer, discharge pressure gauges, and many more options. The choices are subject to your needs and your pocketbook. I am aware that Bell & Gossett, the parent brand for Hoffman and Domestic is working to add these units to the esp-Systemwize sizing program but sometimes the catalog is nice because you can see the selections around it.

Condensate units normally have small receivers, and the pump starts based on the level control IN THE RECEIVER. This will differ greatly from boiler feed units which I will examine next week in the R. L. Deppmann Monday Morning Minutes.

Have you always wondered why condensate pump inlet flanges are often rectangular instead of standard round flanges? Find out why here.