Happy New Year 2021! I pray that we all have a healthy year and see the return of normal lifestyles. This final blog in this series will recap some of the best piping practices suggested by the Hydraulic Institute and Xylem Bell & Gossett.

Over the last several weeks we discussed the feared NPSH and showed it is rarely an issue at design conditions. Often, noise and pressure problems are caused by air in the suction piping system. The suction pipe, in many cooling pumping systems, is under very little pressure. In fact, the suction of the pump could be under a vacuum.

AIR WILL NOT VENT FROM A VACUUM TO ATMOSPHERE!

Towers normally have very low storage heights of water in the basin. Any vortex that starts will reduce the flow rate and pull air into the piping system. 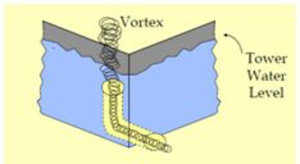 RECOMMENDATION #2: Avoid air traps caused by elevation changes in the suction pipe. Elbows used to go up & over pipe or obstacles cause an air trap. The improper use of a reducer at the pump flange can have the same effect.

RECOMMENDATION #3: When needed, use eccentric reducers at the pump suction. The orientation depends on where the suction pipe is located.

In both examples below, we avoid trapping air while transitioning pipe sizes.

Engineers try to avoid raising a pipe on the tower pump suction above the tower basin. Occasionally, there is no way to avoid this and a check valve must be installed. It is critical that the check valve has a low pressure drop at design flow.

See the B&G TEH-1209 manual for more detailed instructions. 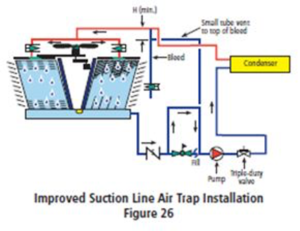 I recommend you put a screen in the tower to catch the large items or you put a large mesh (.125 perf) strainer in the suction line and add a DP switch across it to indicate when the strainer needs cleaning.

Many an engineer will point to many a project with the comment “I’ve never had an issue using just my hydronic system standards.” The engineer is probably correct. If you do enough projects, there could be a problem job soon and these rules will help you avoid that “one time” issue.

This concludes our series on Net Positive Suction Head (NPSH).  Look forward to an electrical topic for mechanical engineers next week.

Check out the rest of the Net Positive Suction Head (NPSH) Series: