Primary-Secondary or Primary-Variable Heating Systems: Which System to Choose?

Primary-Secondary vs. Primary-Variable hydronic boiler pumping systems each have advantages for the engineer to consider. Most people in the industry are in one camp or the other. Since I am a Bell & Gossett pump representative, I have always joked that more pumps purchased for a project must be better.  🙂  What are the reasons to use one system or the other? That is the subject of today’s R. L. Deppmann Monday Morning Minutes.

I joke about purchasing more pumps but that is a key difference between the two systems. The primary secondary piping system will require the extra primary pumps on the boilers with their control, electrical, and installation costs. The owner will have a couple of extra pieces of equipment to maintain.

In primary variable pumping systems, the boiler and piping pressure drop is added to the main system pumps. We are still paying for the energy to overcome the pressure drop of the boiler. There may be a little better efficiency in the base mounted system pumps then the inline boiler pumps. Even if the inline boiler pumps have ECM motors, the overall pumping energy may be less in a primary-variable system. The primary variable system should have on-off automatic valves at each boiler, so we do not flow water through a boiler that is off. These are just motorized butterfly valves so there is some pressure drop but normally it is small.

These are the key differences. The challenge is all about the boiler you choose and whether the manufacturer prefers primary-secondary over primary variable.

Primary-Secondary Boiler Pumping Systems; It is All About the Boiler.

Why would a boiler require primary secondary piping? There are three main reasons. The boiler cannot handle the potential minimum flow rate which the system two-way valves may provide. The boiler is not designed to match system designs with temperature difference greater than 30 or 40 degrees. The boiler controls cannot adjust the burner fast enough to match the system demands.

One of the key purposes of primary-secondary piping is the protection of one zone from changes in flow in the other zone. Engineers who design HVAC and plumbing systems are aware of the use in chilled water systems. The chillers cannot manage too low a flow rate which occurs in the two-way controlled secondary system. To protect the chillers, primary secondary piping is used. Some boilers have the same issue. 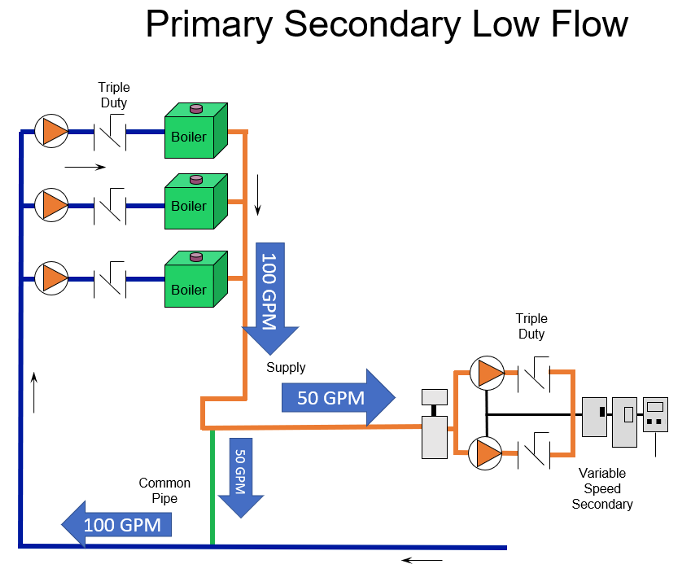 Variable speed primary pumps: Some boilers will use a variable speed ECM pump in lieu of a constant speed pump boiler pump. This is referred to as “variable primary-variable secondary.” The boiler manufacturer will adjust the speed of the pump to try to match the load required. This will produce less flow rate in the common bypass pipe as long as the flow rate is within the limited turndown of the ECM pumps. 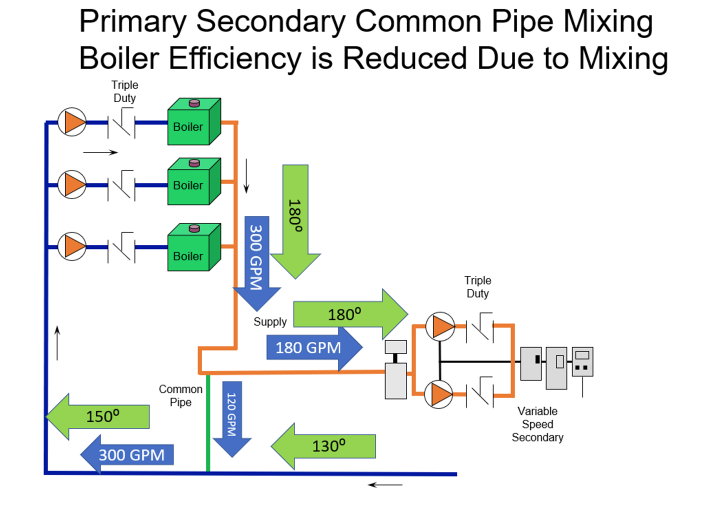 The boiler will bypass a portion of the hot water produced back to the return. This higher temperature water will mix with the lower temperature system return water to provide the required boiler temperature difference.

Primary Variable Boiler Pumping Systems: It is All About the System

These two simple steps will determine whether the design will require primary-secondary or primary variable pumping.

I have not mentioned system turndown matched with boiler turndown. That will be a later R.L. Deppmann Monday Morning Minutes.