Over the last few weeks the Monday Morning Minutes posts have looked at pumping issues with multiple condensers and pumps. One of our most-received questions was, Why do I need cooling tower outlet on-off valves if I have an equalizing line? Why do we see outlet on-off valves on almost all jobs in North Carolina and only half the jobs in Michigan and Northern Ohio? 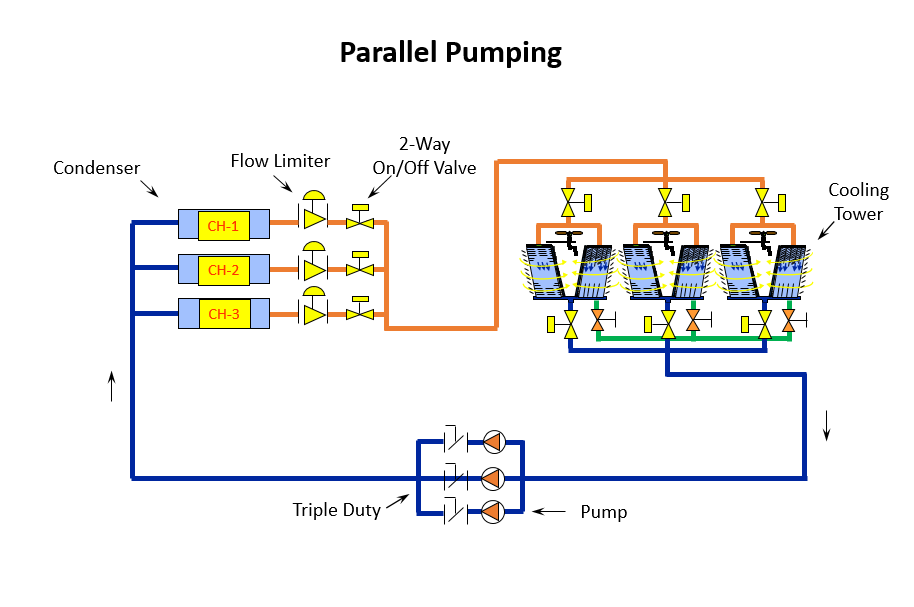 Let’s start with the need for the on-off control valves on the tower outlet and stick with the example we’ve used for the last several weeks. The example is a condenser water pumping system with a design of 800 GPM per tower for a total of 1600 GPM and a third tower as standby.

The tower basins, without control valves, may be modeled as follows: 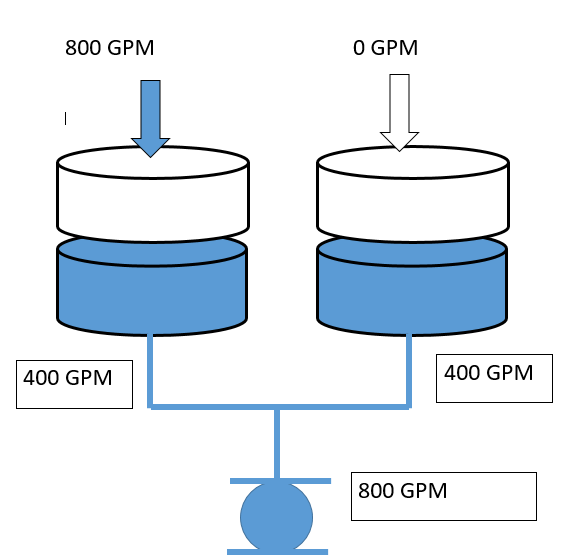 The pump is attempting to pull 800 GPM from a tank or basin and both basins are open to atmosphere. With the exception of slight piping differences, the flow out of each basin will be approximately equal. The flow through the tower and into the basin will not be equal, since one inlet is closed. The result is that the tower basin in the inactive tower will start using makeup water very quickly but the makeup is not 400 GPM. This drop in water level could cause the inactive basin to empty and possibly suck air into the pump. The system pump will air lock and stop pumping. Meanwhile, the tower in operation overflows.

The pipe size is based on the calculated flow rate with the motive force being the gravity flow caused by 1” differential—and 1” differential is .0833 feet.

We could use the Bell and Gossett system syzer for this calculation. Let’s assume in our example we have 20 feet of piping, two elbows, one tee, and the entrance and exit opening pressure drop. What pipe size would we need to flow 120 GPM of water through all of that with 1” pressure drop?

The Bell and Gossett system syzer is a great tool. Here’s what I did: 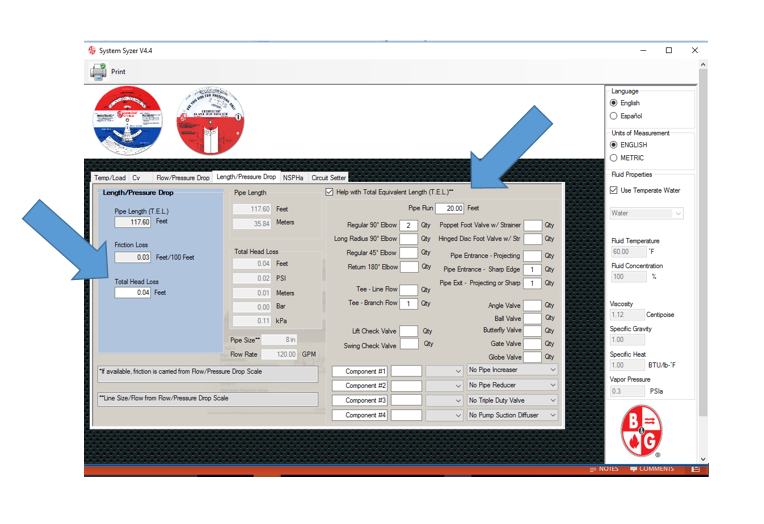 The result was that an 8” pipe should be used for the equalizing line. I was surprised by the amount of total equivalent length (TEL) that the entrance and exit openings caused. In the past, this is a pressure drop I have ignored when calculating cooling tower suction piping pressure drop. I found a note in a BAC tower article reminding the engineer not to forget the entrance and exit pressure drop. It added about 40 feet of TEL! Thank you BAC—I won’t forget it in the future.

Remember: the correct way to size the equalizing pipe is to contact the tower manufacturer. The pipe size should never be less than the opening size of the tower you select.

So why does it seem that there are fewer control valves on tower outlets in Michigan vs. North Carolina?

It doesn’t take an engineer (sorry for the pun) to know that if a basin is flowing 120 GPM in and 400 GPM out that the level will drop and the makeup float will call for makeup water. For this reason the tower manufacturers want 2-position on-off control valves on the outlet of the tower basis when using multiple staged towers.

Or maybe we need to understand why the 2-position valves are there and follow the tower manufacturer’s instruction.

This is all about cooling tower installations, so we defer to the manufacturer of the tower you have chosen to specify for specific details and requirements. Next week we open the fall season with the misunderstood topic of humidifiers.