Matching the Steam Trap to the Control Valve Type (Part 3): Lifting Out of Traps 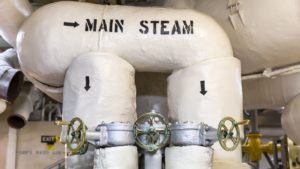 R.L. Deppmann gets lots of heating system troubleshooting calls. Over 1/3 of the calls we get about coil and heat exchanger problems end up being about condensate retention. Remember, lifting requires effort and that effort is called the pressure out of the trap.

Is Pressure Available for Lifting Condensate?

The last two R.L. Deppmann Monday Morning Minutes described the difference in the recommended steam trap selections when the design employs a modulating control valve vs. on-off or no control valve.

In addition to the type of trap, these blogs explained the severe drop in outlet pressure at the discharge of throttled modulating control valve. That throttling may result in the pressure in the terminal unit near or at zero PSIG many times during the year.

If you assume the pressure caused by the drop leg and the pressure drop of the trap cancel each other, there is no pressure available for lift when using a modulating control valve.

A Call from a Concerned Engineer

Never lift out of the steam trap when there is a modulating control valve on the terminal unit. We recently received an email from an engineer regarding a steam system problem. The engineer advised us that he was called out to review an issue with an air handling unit (AHU). The bottom two rows of the coil froze and broke twice.

The photo of the coil above shows the protrusion and hole damage caused by freeze up. It is a result of condensate retention.  This is one of the many tube failures outlined in our “Four types of Heat Exchanger Failures.”

When we examined the piping at the trap outlet, it looked like this. 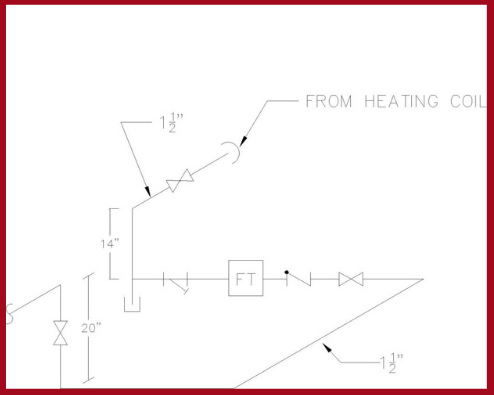 The drop leg to the trap was 14” which caused the ½ PSIG. The float and thermostatic (F&T) steam trap was sized for ½ PSIG differential. The design steam pressure in the coil was 5 PSIG and the system worked fine during very cold weather.

When the temperature outside was warmer than design, but still below freezing, the owner experienced a noise coming from the coil.

Look closely at the measurements shown. We have the 14” of drop leg causing ½ PSIG to the trap. On very low loads, the trap may not need ½ PSIG to pass the reduced flow of condensate. But no matter what happens, we are trying to lift 20” which would require ¾ PSIG of pressure.

Most of the time, there was enough pressure for this coil to drain the condensate. When the control valve throttled to low capacity or no capacity, there was no steam pressure available to lift. The bottom two rows, which were 6” above the outlet, ended up freezing.

The Solution for Lifting out of Modulating Loads

The solution is to avoid lifting out of a trap with a modulating load. This application was very tight on space, there was only 6” from the trap discharge pipe to a floor. This application needed a very small condensate pump. We recommend a Xylem Hoffman Watchman condensate pump. It has an inlet as low as 6” above the floor. It is 1/3 HP 115/60/1 and does not need a control panel. 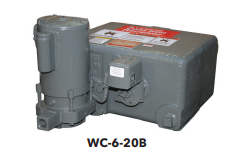 If you have an application that requires lifting from a steam terminal unit or coil with a modulating control valve, use a condensate pump. Contact R. L. Deppmann for sizing and piping recommendations.

Catch up on the entire Match the Steam Trap to the Control Valve Type Series:

Part 1 of the series: Match the Steam Trap to the Control Valve Type

Part 2 of the series: Match the Steam Trap to the Control Valve Type – Types of Traps