Match the Steam Trap to the Control Valve Type (Part 2): Types of Traps

Which style of steam trap should I use when I have a modulating control valve? What happens if I “lift” out of a steam trap? The R. L. Deppmann Monday Morning Minutes answers this in part two of the series, “Match the Steam Trap to the Control Valve Type (Part 2).”

Inverted bucket traps have an upside-down cup or bucket. They are normally open. This means that prior to steam or condensate entering the bucket, the outlet port is open. When steam enters the trap, the bucket rises and the trap closes. This type of trap is either full-open or full-closed. It does not modulate.

Bucket traps are on-off style. They are sized for a given pressure drop at the rated flow rate.

Here is an example: Assume the unit heater is designed for 225 pounds per hour (PPH) and we use a 2 times safety factor. The unit heater has no control valve and has 6 PSIG steam to it. The return is at 0 PSIG or gravity return. If the lift out of the trap is 28”, the trap differential would be 6 PSIG-1 PSIG = 5 PSIG. We will ignore the friction loss and valve losses for this example. The capacity would be 225 x 2 = 450 PPH. 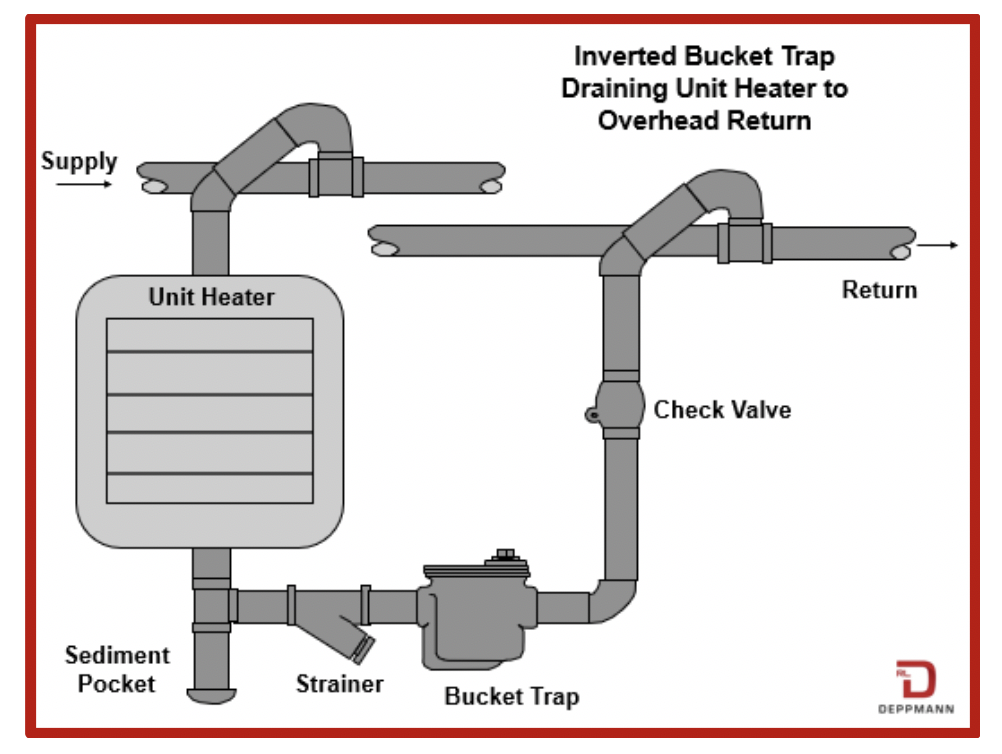 The trap would be a Hoffman series B0 with a maximum pressure of 20 PSIG and 450 PPH at a 5 PSIG differential across the trap. Since the trap does not modulate, it will always provide 5 PSIG drop at 450 PPH.

If the unit heater with this trap selection is supplied with 10 PSIG, the trap will pass over 450 PPH while still providing enough pressure to lift the condensate to the return. Therefore, a bucket trap is sometimes called a lift trap. Be careful, it can only lift if there is enough inlet pressure.

If the capacity entering the inverted bucket trap drops too low. The trap may lose its prime and blow steam. It is not a good idea to use these if the load will drop dramatically.

Float and Thermostatic traps are normally closed to steam and condensate while normally open to air. This means if steam is present in a working trap, it will be closed. As condensate enters the trap, the float rises, and the condensate will leave the trap. The float seeks a level based on the amount of condensate entering. This trap modulates with modulating load.

The thermostatic portion of a F&T steam trap allows for fast venting. The float ball allows for modulation of the amount of condensate leaving the trap. There is no need to prime the trap for proper operation. The trap will operate at very low loads without any issues.

All the reasons mentioned above make the float and thermostatic (F&T) trap superior in modulating temperature control valve applications.

Remember that the pressure leaving a modulating steam control valve may be at, or close to, zero PSIG. This will be the pressure entering the steam trap.  This was discussed in part 1 of this series. In addition, the installed vacuum breaker may open and, again, drop the trap inlet pressure to “0” PSIG. When sizing any trap for a modulating controlled load, the only guaranteed pressure at the inlet of the trap is the pressure caused by condensate elevation in the drop leg.

Steam traps on modulating loads should be sized for ½ PSIG or the pressure caused by the drop leg. 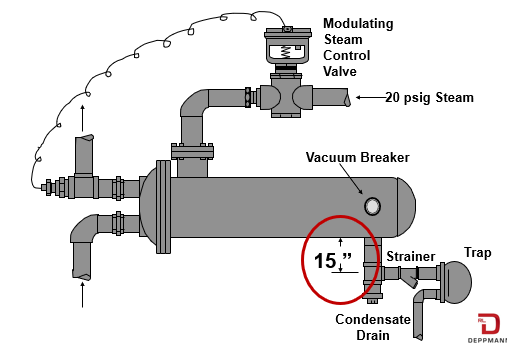 What You Need to Know

Catch up on the entire Match the Steam Trap to the Control Valve Type Series:

Part 1 of the series: Match the Steam Trap to the Control Valve Type