In the last RLD Monday Morning Minute I described the pre-pressurized tank sizing for constant-speed booster systems. There are those who say, “My pressure booster system is different and doesn’t need a tank at all.” I have news for you, it’s not the pressure booster that needs a tank. Boosters run fine without tanks. If you want to shut down the booster system, then the system it is installed into needs the tank. Let’s look at the reasons why.

In part 1 of this series, you’ll see a rich history of B&G variable and constant-speed booster systems going back decades with no need for a bladder tank. It was only once the booster system was shut down to save energy that the system needed a tank. That doesn’t change, whether the equipment is constant-speed or variable-speed. It’s the system that needs the tank.

Why Do You Need a Tank?

Cf for water is about 4.6 X 10-6 Pa-1. So let’s say I have a plumbing system with no air in it and 1000 gallons in the piping at 80 PSIG, and I take about four ounces of water out. The pressure will drop to 30 PSIG. In other words, if the booster system is off, it won’t take much water to drop the pressure below what I need for a flush valve.

Try this at home or in your office. We did! In a two-story office building we had about 70 PSIG of pressure.We closed the city water, which is the same as stopping the pump. We drained water from the system until the pressure dropped to 30 PSIG. The result was 3 ounces of water. 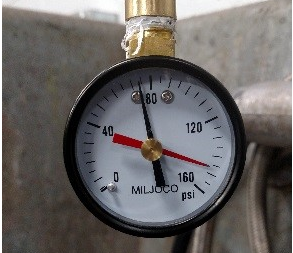 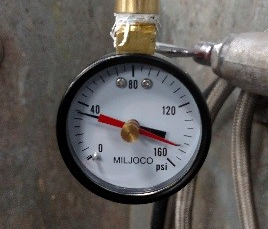 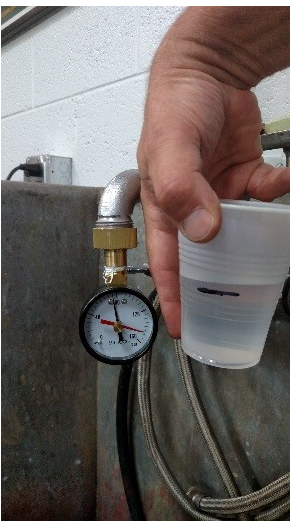 A major manufacturer of flush valves published a requirement of 18 GPM at a minimum of 25 PSIG. This manufacturer indicates a 1.6 liter or ½ gallon usage per flush in about 2 seconds.  So I need about 32 ounces of water in an instant without dropping the flowing pressure below 25 PSIG. Based on our test, when I take 4 ounces of water out of the system, we had a 40 PSIG pressure drop.

If I don’t have a supply of water under pressure, my valve will chatter or not flush at all. In addition, there could be noises in the system.

The ramp-up speed depends on the minimum speed that the system shut down at and the speed required to meet the pressure required at the fixture. It’s not the full 30-second ramp up speed, but it’s slower than the 2 seconds it takes for a flush valve to use its water. There must be some small volume stored somewhere and that somewhere is in a tank.

Other Reasons for a Tank

In the second article in this series, we mentioned that tanks are sized to protect starters and motors from too many starts per hour. In the variable speed world, this is not really a factor. Motor damage isn’t a concern with constant soft starts and stops from drives. One motor manufacturer we contacted indicated there isn’t a requirement for a limited number of starts per hour. It seems the pump life could be affected, but we have no facts to back up any type of statement. Starts per hour do not appear to be a concern.

Whether it’s variable speed or not, an operating pump uses more energy than a pump that is off. So just how much energy would we use at very low flows in a variable speed system? It depends on the horsepower. In our example in part 2, we showed that a 7-1/2 constant speed booster system in an apartment building could use $400 per year of energy at no or low flow. That same system as a variable speed pump could cost significantly less to operate and cost up to $200 per year operating at less than 10% load depending on suction pressure and elevation. Even if we save a fraction of that, there is some money to save.

You could choose to let the pressure booster run all the time and eliminate the tank, but in times of no flow that is clearly a waste of energy.

Deppmann strongly recommends the use of a tank in pressure booster applications. In the next article, we’ll examine the size of that tank.