Hydronic Expansion Tanks: Have I Ever Pumped into the Point of No Pressure Change? 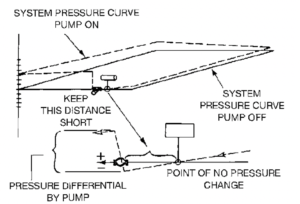 There is a constant flow of hydronic system design questions coming into R. L. Deppmann Company. Sometimes the questions are about complicated hydronic, steam, or plumbing challenges. Sometimes they are challenges to age old standards. This week and the next two, I will summarize a challenge about pumping into the expansion tank instead of away from it. Spoiler alert: Can you do it? The answer is maybe.

Do you have middle school children or, maybe, any age children? You must be familiar with the constant negotiation.

The negotiation has just started.

Have You Ever Pumped into the Point of No Pressure Change?

I received engineer questions about this very subject twice in the last few months. Job conditions seemed to suggest a solution to pump into the expansion tank. Should we? Well 99.9% of the time there is nothing but trouble if we do. But yes, I have pumped into the point of no pressure change (PNPS). The negotiation starts.

Back a long time ago, a lot of residential systems were supplied with boilers stocked locally by well established wholesalers. These boilers came with a pump mounted on them. The pump was mounted on the inlet to the boiler. 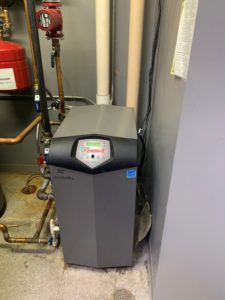 Since the expansion tank was connected to the airtrol boiler fitting at the top of the boiler, these pumps pumped into the point of no pressure change on a regular basis. When I started in the industry, there were many engineers who insisted on pumping into the boiler because they always had.

Residential Hydronic Heating Systems Started with Pumps on the Return

I mentioned pumps mounted on the boiler. A typical system example follows.

Most residential circulators of long ago had a Bell & Gossett series 100, 3-piece circulator. These pumps, properly oiled, lasted for decades. Pipe sizing was generous. Terminal units were large cast iron radiators. The pumps rarely needed more than 8 feet of head to heat a house. The compression tank was mounted at the boiler with a fill valve (PRV) set at 12 PSIG. 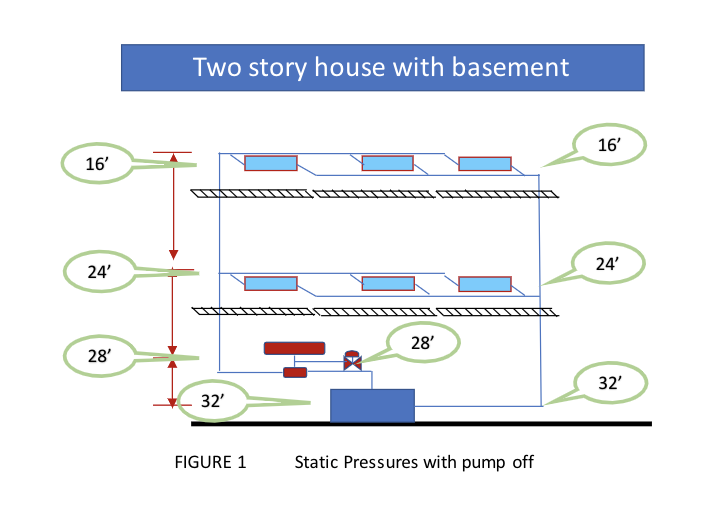 Figure 1 shows a two-story house with a basement. The gauges show the static pressures in the system in feet of water. The pressures start at the compression tank where the 12 PSIG PRV is 28 feet of pressure in the system. The return pipe to the boiler is 4 feet below the PRV so the pressure is 32 feet. You get the idea. Now we turn on the pump. 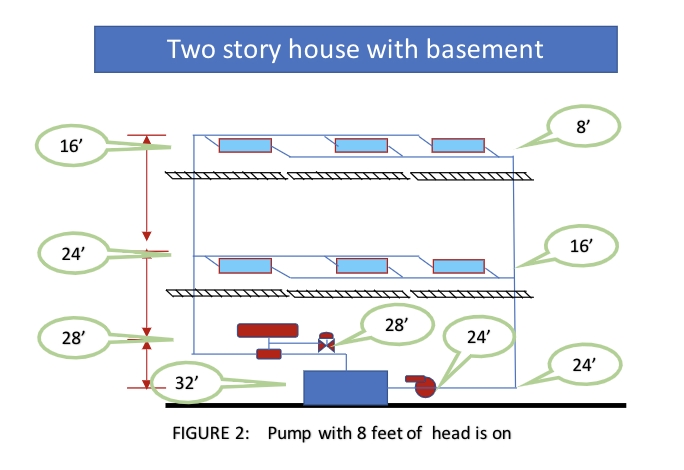 Figure 2 shows the pump operating at 8 feet of head and pumping into the compression tank. The discharge pressure remains about the same at 32 feet and the suction drops by 8 feet to 24. As the pipe rises in the system, the pressure drops. I did not show the pressure drop in the mains on purpose. They would only be tenths of a foot and I did not want to muddy the story with fractions.

There is nothing wrong with the operation of the system above. The pressures are all positive and will get larger as we start the boiler. This example of pumping into the point of no pressure change is fine and will work as expected.

If you are not familiar with the effect of pumping into the PNPC. Here are some resources to help you catch up.

A longer written discussion is in the Bell & Gossett Air Control manual. You can download it here.

Tools to Select and Design HVAC & Plumbing Equipment | R.L. Deppmann, then go to hydronic technical manuals and click on THE-1196B

As systems got larger, problems started to happen. Here is a three-story house example. 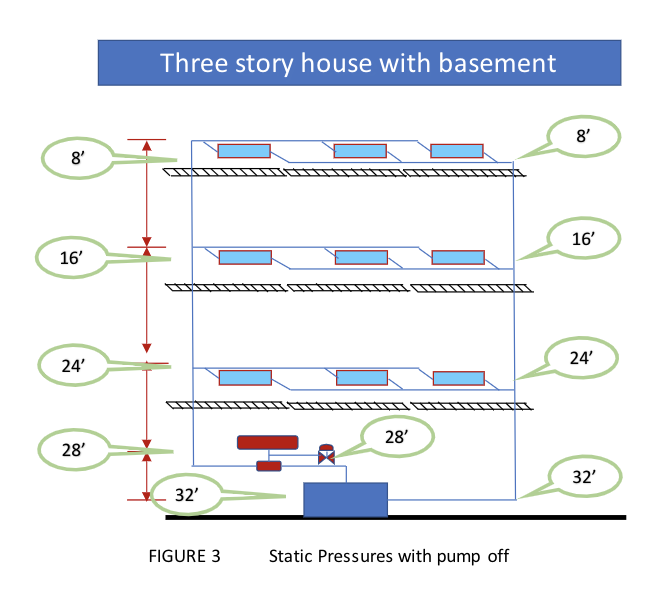 Things are OK at static cold fill with this system. Now we turn on the pump. 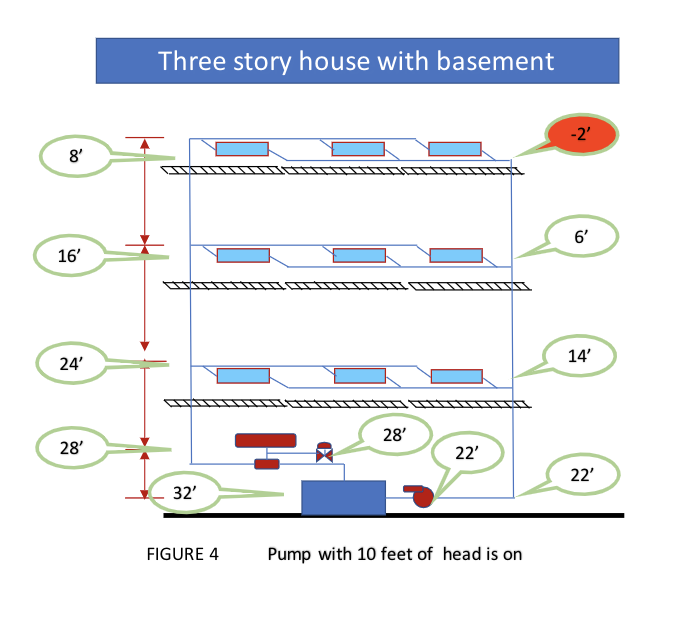 Since the system is larger, the pump head is now 10 feet instead of 8 feet. Still very small but look at the pressures. The top of the system went negative at pump startup. That means any air at the top cannot get out. The operational trouble begins.

Once the system heats up, all the pressures will increase and be positive. In the winter, this system works fine. In the spring and fall with cycling, complaint of low heat occurs on the top floors.

How do we solve this? One simple solution is to raise the fill pressure and make the compression tank larger. This works as long at the system boiler can handle more pressure and if the pump head is low.

As hydronics became more pronounced in schools and offices, the system elevation was greater. The pump heads were much greater.  It was time to pump away from the point of no pressure change. Look at an example with a pump head of 30 feet in a three-story example. The pressures start out positive and remain positive throughout the operation. 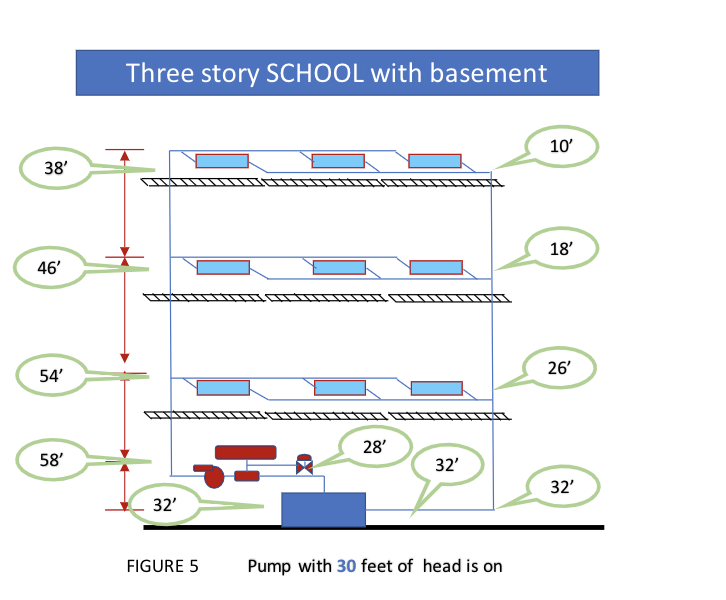 This R.L. Deppmann Monday Morning Minutes is a review for most seasoned engineers. Next week I will show an example of why an engineer asked the question in the first place. That blog will be anything but basic.

Check our Point of No Pressure series:

Part 1: Hydronic Expansion Tanks: Can I Pump into the Point of No Pressure Change (PNPC) to Reduce the Tank Size? (Part 1 of 3)

Part 2: Hydronic Expansion Tanks: Can I Pump into the Point of No Pressure Change (PNPC) to Reduce the Tank Size? (Part 2 of 3)

Part 3: Hydronic Expansion Tanks: Can I Pump into the Point of No Pressure Change (PNPC) to Reduce the Tank Size? (Part 3 of 3)