Hydronic Expansion Tanks: Can I Pump into the Point of No Pressure Change (PNPC) to Reduce the Tank Size? (Part 3 of 3) 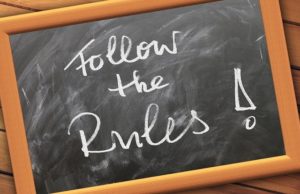 Can we pump into the point of no pressure change in a closed hydronic system? We gathered feedback on the proposed system by a local engineer in part 1 of this series.  Today, we look at the argument used to propose this unusual design. We’ll also look at the feedback we received from some readers on this subject.

Recap of the Issue: Expansion Tanks Are Just Too Big 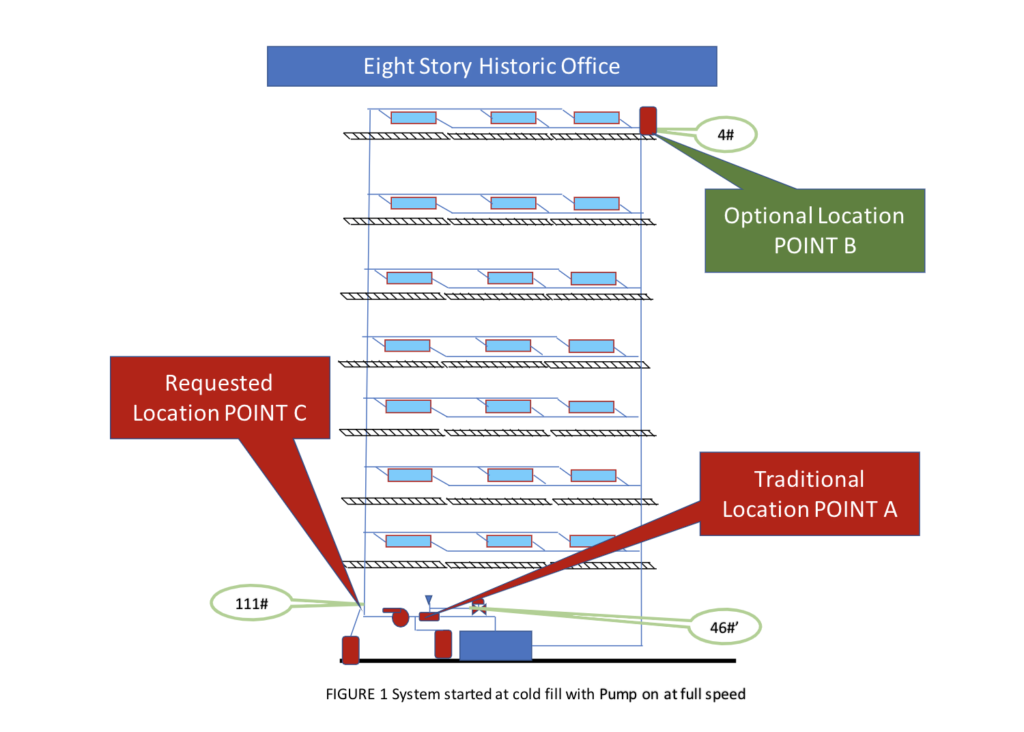 Here is the story. An existing 8 story, very large, old structure will be gutted and renovated with retail and restaurants on the main level. The floors are 12 feet high and the heating equipment will be located on the main floor. The engineer is attempting to stay away from pressures over 120 PSIG. The pumps have 150 feet of head. This large system will have 12,000 gallons of water.

The engineer looked at the traditional pump suction location (A). They also looked at the return of the system at the top of the high rise (B). Both solutions resulted in expansion tanks which were deemed too large.

Putting the tank on the pump discharge (C) solves the pressure problem and the tank size problem. This is pumping into the point of no pressure change (PNPC) and breaks the rules. My concern was the air problems it would create. Today, we look at the reasoning the engineer used in the proposal. Here is the tank solution proposed. 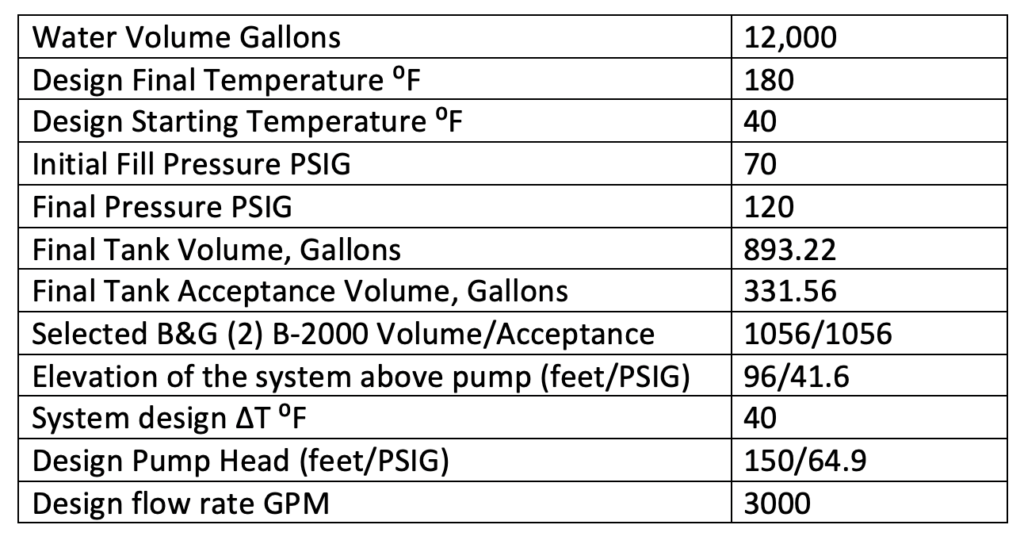 Variable Speed Pumping and Pressure at the Top of the System

This seems fine in theory. We would have to start the pump at minimum speed and gradually increase it during commissioning. Once the system was at 180⁰F, the pressure would be high, and the numbers work. The challenge would be training the owner to always start up this way if the system were shut down. There was also another concern! 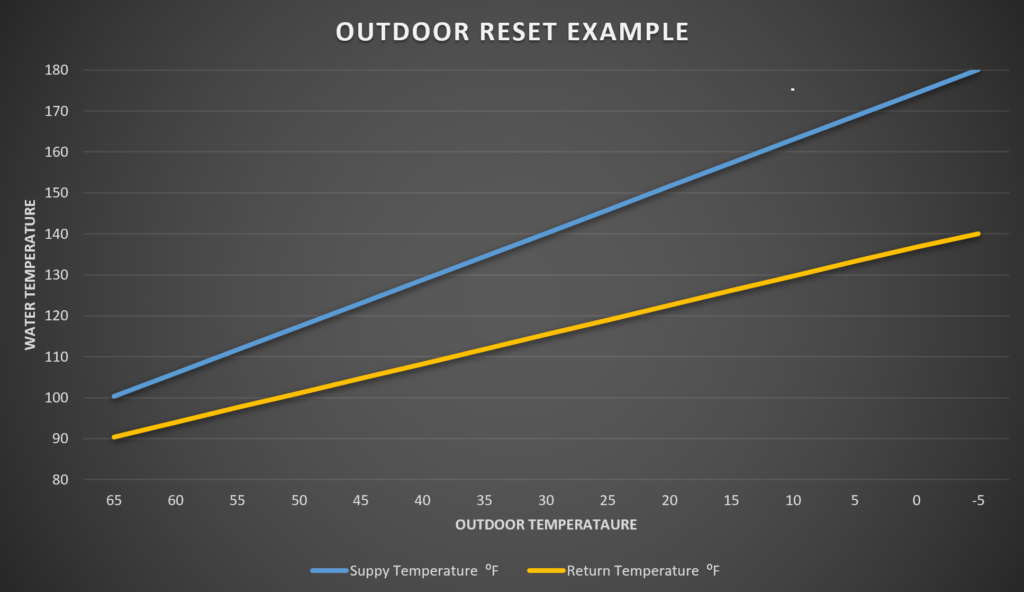 In a perfectly sized expansion tank, the pressure in the tank will follow the average temperature in the system. The tank sizes were selected and shown in part 1 of the series. The volume is, as always, an educated guess.

What tank pressure will the system experience as I change the pressure? I can use the Bell & Gossett esp-Systemwize expansion tank program and reverse engineer the numbers to always fit the tank size. In other words, if I have the tank volumes selected, what pressure will there be in the system for a variety of temperatures. I will just change the temperature in the program and keep raising the pressure until I get back to the volume of the tank.

The first thing we must do is change the average temperature to the actual which is not 180⁰F.  We do this by changing the average to 160⁰F and raising the fill pressure until the tank size in the program matches the tank size on the job. Interesting fact: Three decades ago, this was something all contractors did when commissioning the system. It was taught at the training school. Raise the fill pressure until, at design temperature, the pressure was within 20% of the relief valve setting.  This helped eliminate the oversizing of tanks which was prevalent then as well as today.

Here is the result of the iterations I did in Bell & Gossett esp-Systemwize. 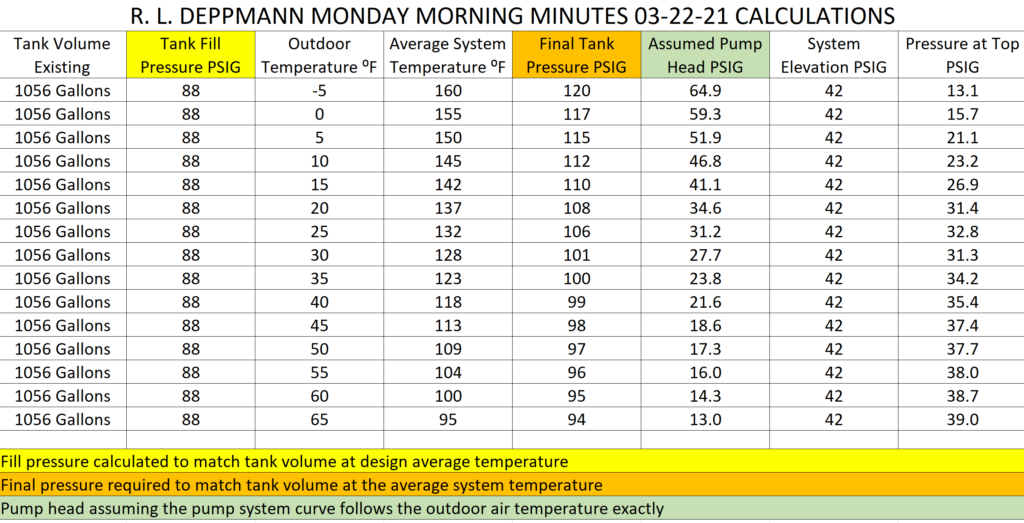 The thinking of this engineer was sound. The pressure at the top of the system was not negative in this calculation. Why not Break the Rules? Here are the concerns I had coupled with the responses received in this Monday Morning Series.

Although this looks very good on paper, I would tread lightly.

Any one of these issues could cause negative pressure in the return line riser. This may set the stage for automatic air vents to suck air into the system. We know that air in a hydronic system will cause problems with heat and flow.

My counsel to the engineer was simple. Your logic is clear. Your knowledge of the interaction between the system temperature and the expansion tank is stellar. Your understanding of the pump system curve is suburb. Given the potential issues, my counsel is to “FOLLOW THE RULES” and push for more space or split the system into two mechanical rooms as described in part 2 of this series.

All of this said this is a new way to think about the point of no pressure change. I hope it helps you to understand the relationship between the expansion tank and system pressure and temperature. I hope it starts discussions in your office.

Catch up on the entire series: