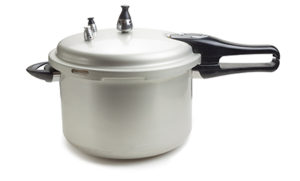 Pressure relief valve sizing for heating systems is well documented by ASHRAE, boiler codes, and product manufacturers such as Bell & Gossett. Relief valve sizing methods for chilled water systems are not easy to find. How do you size this small insurance policy, the chilled water pressure relief valve? The following is a sizing method created back in 1996 for a newsletter I called, The Deppmann Connection.

Every closed hydronic system must have a compression or expansion tank. One purpose of the tank is to keep the system pressure under control. The pressure relief valve is designed to relieve the pressure if the tank is waterlogged or if the bladder fails or the tank is isolated from the system. These systems are filled with water or Dow glycol/water mix.

In order to increase the pressure with the pump off, we must add heat.

Where Does the Heat Come From?

The heat in a chilled water system comes from ambient conditions. When the chiller is shut down at the end of the season or due to a failure, the air surrounding the pipe and outside air blowing across coils adds BTUs to the water. These BTUs cause a temperature rise which in turn tries to raise the pressure. 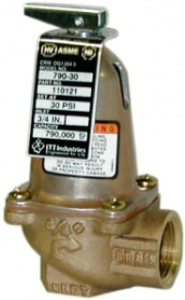 BTUH Transfer from the Piping System

BTUH Transfer from the Coils

The BTUH added to the piping system will follow the formula:

A is the heat transfer surface of the insulated pipe. U is the rate of heat transfer, and LMTD is the log mean temperature difference between the air and water in the Air Handling Unit (AHU) coil.

When the chiller is off and the fans and pumps are on, the water temperature will increase as it passes through the AHU coil. The water will try to expand as it is heated by the air. If the expansion tank is missing or damaged, the pressure will build up. The relief valve will then blow to protect the system. How big does the relief valve have to be?

The flow rate passing the coils will have a volume expansion based on the GPM through them or expansion per minute. Each time the water passes the coils, the average temperature in the system goes up and there is a corresponding attempt to increase the volume. We have to make sure that the relief valve can relieve the volume expansion to avoid the pressure from building.

Let’s look at a ridiculous example to make a point. Assume we have a 3,000 ton chilled water system with a 10°F ∆T. Assume the chiller is off and the expansion tank is damaged and the fans are blowing and the outside temperature is 100°F. That’s a lot of ands!

Think of the expansion tank formula. There is the expansion of water minus the expansion of pipe times the system volume. The 7,200 GPM will experience an attempted volume expansion from 45°F to 55°F. That expansion will happen each minute that the 7,200 gallons is heated 10°F at the coils. If the relief valve will open at 100 PSIG and we start at 60 PSIG, there will be about 5.6 gallons of expansion attempted per minute.

Another phenomenon often overlooked is that the minute the relief valve blows more than 5 GPM another factor comes into play. The pressure reducing valve is designed to keep the makeup water flow rate very low. It is simply for makeup. The maximum flow rate of the B&G B7-12 is around 5 GPM. If we relieve more than we makeup there will be air in the pipe. That air in the pipe will act like an expansion tank. In this example, 20 gallons of air will be added resulting in a pressure under control.

It is clear that the Bell & Gossett series 790 set at the pressure you need should protect the majority of systems we encounter. For more information on the 790 series relief valves, visit the ASME Relief Valve Model 790 page on the B&G website.

Next week the R. L. Deppmann Monday Morning Minutes will start a series on expansion tanks and sizing.