The variable speed pump control head varies depending on where the sensor is located. Last week, we used a pumping system with a capacity of 650 GPM at 60 feet with a single coil. Let’s use the same pump and show a representation of a larger hydronic system. 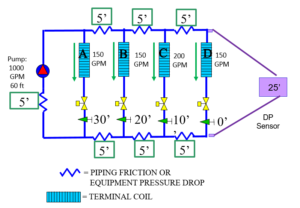 To make this easier to look at, I made all the coil and two-way control valve pressure drops the same 25 feet. If they differed, only the balance valve numbers would change. Notice the manual balance valves are throttled and the system is in balance.

So what happens if we move the differential sensor closer to the mechanical equipment room? What if we locate it across zone C? 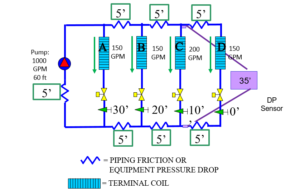 We showed last week that DP sensor location has a direct effect on energy costs in a variable flow hydronic system. We can use the Bell & Gossett ESP-Systemwize program to see how the DP sensor setpoint affects the operating costs. Here’s one screenshot of the variable speed pump selected and modeled with a 60-foot control head:

The savings are significant if the DP sensor is properly located. In this example, based on the PLEV loading, you can save almost $2,000 per year by placing the differential sensor feedback in the right place. 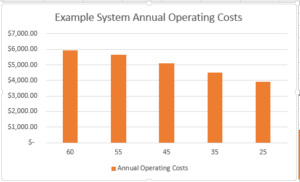 Next week, the R. L. Deppmann Monday Morning Minutes will present a series of fast technical topics at our Open House in Novi, Michigan on June 27, 2018.