HVAC Hydronic Pumps – Should I Trim the Impeller or Trim with Speed? (Part 2 of 2) 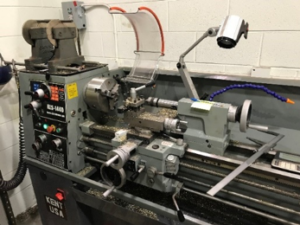 In the last R. L. Deppmann Monday Morning Minutes, I offered a couple of reasons why an engineer would schedule a larger impeller than needed and use the variable frequency drive (VFD) to artificially “trim” the impeller. Today we look at some reasons why physically trimming the impeller may offer value.

Why Should I Trim the Impeller Rather Than Dial Down the Speed?

In part 1 of this short series, I showed how the efficiency of a pump may be greater if we use a larger impeller and dial down the speed. Why might this cause a problem? There is one large disadvantage to trimming the maximum speed of the motor using the VFD and supplying a pump at its maximum impeller (full-runner). 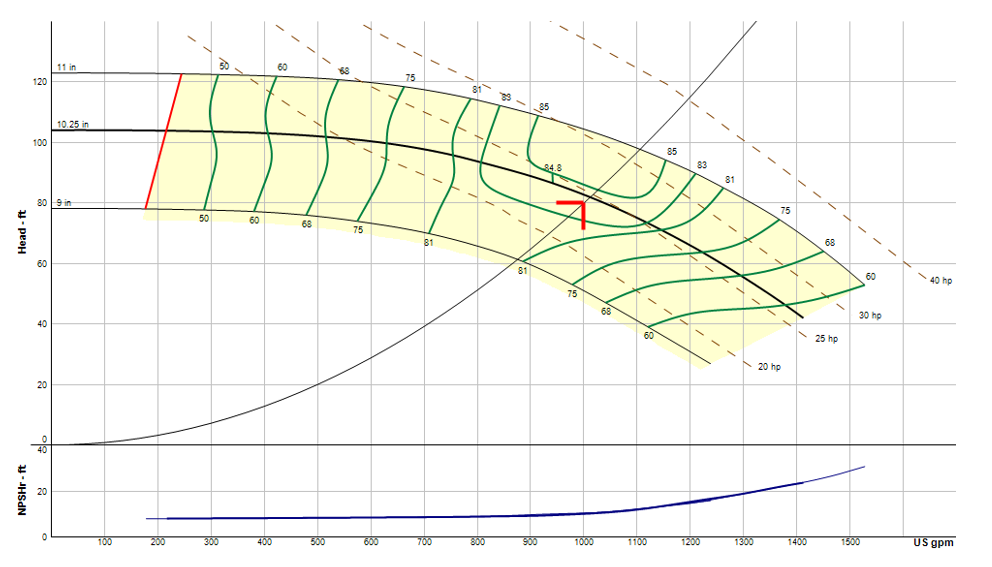 In this constant speed curve, we can see that the selection with a trimmed impeller would be non-overloading at 30 HP. If I put the “full runner” impeller in this pump, the required horsepower at full speed would be 40 HP. This means if I try to start the pump at full speed, the VFD will trip the breaker. Here is the variable speed curve B&G would supply. 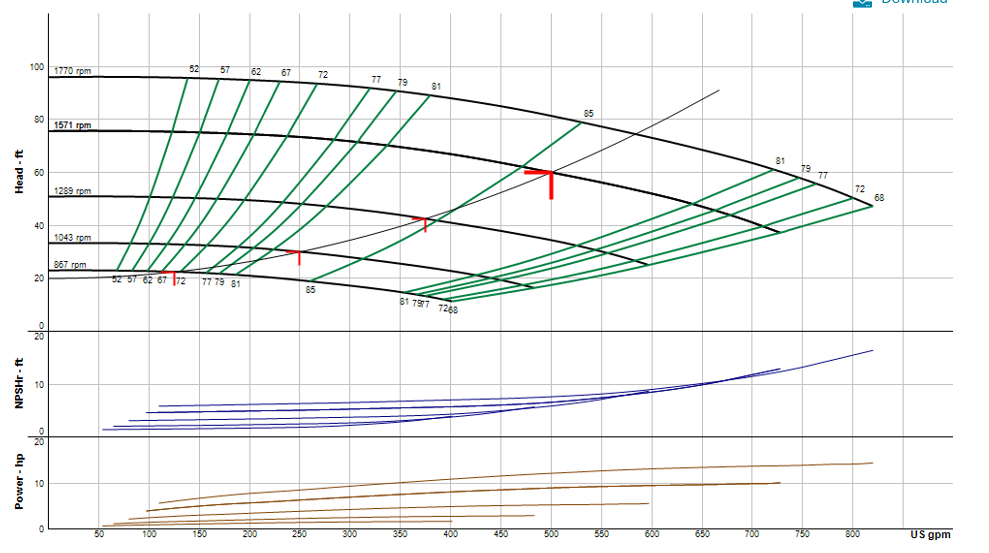 We could adjust the speed down to 1707 RPM and then lock it in before we start the 30 HP pump. That would solve the issue of being short on full speed horsepower during the construction and commissioning. What happens if the drive is repaired or replaced in the future? Will the owner and service contractor be confused? If a board is replaced in the drive, the locked-in maximum speed would disappear. The owner would have to know what your original intention was.

Bell & Gossett ESP-Systemwize Has Your Back!

Bell & Gossett (B&G) understands that many engineers are very busy and don’t spend a great deal of time selecting pumps. They know engineers want the best efficiency, but they also want a safe selection. When you are selecting variable speed pumps, B&G does something unique for you. They will automatically raise the impeller size to the maximum that still provides a non-overloading selection. In the example above, the B&G ESP-Systemwize program will raise the impeller to 10.5” which, at full speed, will still operate with the supplied 30 HP motor.

This selection with a trimmed impeller larger than required but less than the full diameter raises the efficiency to 85.3% instead of the fully trimmed impeller at 84.1%. You miss out on the extra 0.4% of efficiency (85.7%) you would realize with the full runner but save all the issues of supplying a pump with a smaller motor.

You could put a 40 HP motor on the pump with the full runner impeller but the added first cost will result in a long payback for the small increase inefficiency. The B&G program does give you the option of changing the impeller size to the maximum full runner, but keep your eye out for changes in the horsepower as a result.

Next week we will start a series on parallel pumping.