The R. L. Deppmann Startup and Warranty Team team receives a lot of interesting calls about systems that aren’t working properly.  In this case, our service team received a call to look at a pressure booster that wasn’t functioning as expected. The application involved a variable-speed Xylem Gould Water Technology Aquaboost constant pressure booster system.

Just for fun, we’re challenging to our readers to review the details and tell us your answer to the problem.  And we’ll reward a randomly selected winner with a gift!

The company in question is an industrial company. The application was the addition of a break area in the far back of the plant, which included two restrooms and a lunch area.  The small addition’s fixture count included:

The company did the project engineering themselves and they did not hire a consultant. The actual system was purchased through a wholesaler, who was given the system requirements.

The Problem with the Pressure Booster System

The Deppmann Startup and Warranty team received a call from the customer stating the system would come on and then the flush valves would chatter, not flush, and the pressure booster system would go down. They forwarded their calculations, shown below: 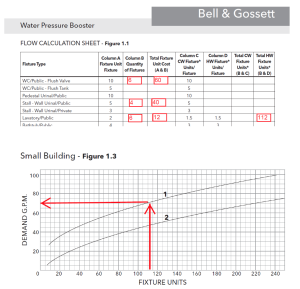 The email also included the pressure required on the discharge at 50 PSIG and a minimum suction pressure of 20 PSIG. The Aquaboost selected was a model 1B304C-VS rated 70 GPM at 30 PSIG differential boost pressure with a 3 HP non-overloading motor. Everything looked great on paper.

When our team arrived at the job site to check out the booster system, we found that it was off on automatic no flow condition. This was as expected, since there was no water usage at the time. We tested the system by operating a flush valve and the booster pump started. There was a little valve chatter at the urinal, but after a few seconds it worked fine with no chatter. When we attempted to flush two valves at the same time, the booster struggled and then went into automatic shutdown.

The booster looked like it was sized perfectly.  So….what was the problem?

If you think you know the answer, contact the Deppmann Team via email by December 6, 2015 to be entered to win a Xylem Gould Water Technology Gift.

Join us next week for the answer!