In our previous Monday Morning Minutes post, we told you the story of a pressure booster that didn’t work as intended.  The story ended as follows:

When our team arrived at the job site to check out the booster system, we found that it was off on automatic no flow condition. This was as expected, since there was no water usage at the time. We tested the system by operating a flush valve and the booster pump started. There was a little valve chatter at the urinal, but after a few seconds it worked fine with no chatter. When we attempted to flush two valves at the same time, the booster struggled and then went into automatic shutdown.

The booster looked like it was sized perfectly. So….what was the problem?

Upon further investigation, the technician identified three items that were unique to this installation.

No tank on the system

The pressure booster was located close to the restrooms, but it didn’t have a tank. Several recent Monday Morning Minutes explained the reason and need for a tank. When a flush valve was used, the booster system started but it did take a few seconds to get to the proper speed.  The system worked with a single flush with a bit of chattering.

Rest area was for factory breaks

There were about 50 people working in this area and the original restroom was so far away that the employees were complaining. Apparently, there wasn’t enough time to get to the break area and use the bathroom and get back to the job in the time allotted.

The owner created this rest area to meet the employee restroom needs. In fact, it wasn’t unusual to have a small line in the men’s room. It was also not unusual for 2 or 3 valves to be flushed at exactly the same time every now and then. (We’ve all experienced this. Think of a sporting event or a seminar meeting at a hotel or even a concert.)

Simultaneous use of flush valves

This turned out to be the largest issue with the installation. When our technician saw the large drop in suction pressure, a red flag went up. We know that a flush valve may only use 1.6 liters or ½ gallon of water. The rate of flow for that 1.6 liters is 25 GPM. When two valves were flushed at the same time, the instantaneous flow rate is 50 GPM.

Root Cause of the Pressure Booster Issue

The Deppmann technician saw an issue when the design flow rate was 70 GPM, yet the suction pressure dropped dramatically at 50 GPM. A quick inspection of the piping in the plant feeding the booster system found 1-1/2” pipe which happened to match the pump suction pipe.

The contractor has installed 1-1/2” copper pipe…but there was 400 feet of piping! A quick check of the mobile version of the Bell and Gossett system syzer revealed that the pressure drop per 100 feet was 19.86 feet or 32 PSIG!  The system was tripping on the low suction pressure cutoff switch. 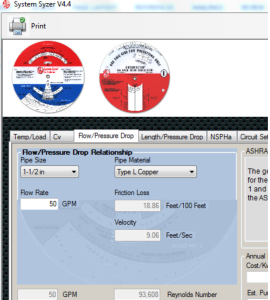 The solution was to install a B&G bladder hydro-pneumatic tank and size it to handle enough water to get them through the 15 minute break time. We estimated that about 30 gallons of storage would do the trick.

Interestingly enough, as we thought about this system, there was another solution available prior to the purchase of the Aquaboost pressure booster. If there was enough pressure in the piping system in times of no flow, we could just use a tank without a booster system. The tank would be sized for the total flow rate expected during the break period when the pipe pressure would drop. However, after more investigation, it turns out there was not enough pressure so the booster system was necessary.

NOTE: For everyone who sent us the correct answer, we will be drawing names later today and announcing the winner next week.  See below for a picture of the prize awarded. Did you know that the R. L. Deppmann team uses a spreadsheet tool to evaluate pressure boosters, which would have identified this problem at design stage?  In the next Monday Morning Minutes release, we’ll review the process for determining the capacities of a domestic service water pressure booster.