Over the last several weeks, the R L Deppmann Monday Morning Minutes articles examined the trap sizing out of a heat exchanger or coil with a modulating control valve. This week we turn our attention to the heat exchanger, or coil piping, after the steam trap. Often, the gravity condensate return main is overhead and there is a temptation to lift the condensate out of the trap. 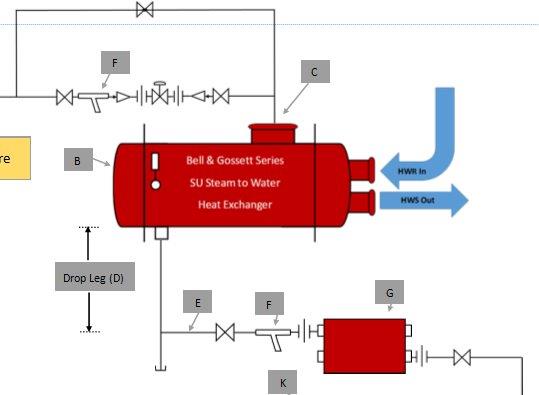 The back pressure created by lift is approximately 1 PSIG for every 2 feet of condensate lift. The actual number is 2.31 feet per pound, but 2 feet includes some safety factor and allowance for friction loss. If a unit heater with no control valve had 8 PSIG of pressure entering the steam trap, and it was sized at full pounds per hour (PPH) capacity with a 2PSIG pressure differential, the steam trap outlet pressure is 6 PSIG. This is enough pressure to lift the condensate 12 feet to a gravity return main. If there was an on-off control valve on the terminal unit, there would still be a constant minimum pressure available on the outlet of the steam trap for lift. The problems begin when we throttle a steam control valve.

If we use the 12-foot lift example from above, when the control valve is closed and the steam flow has stopped, there is a column of water on the outlet of the check valve. That 12-foot column would require about 6 PSIG of inlet pressure to push the check valve open and start flow. Meanwhile, condensate is backing up into the heat exchanger or coil. 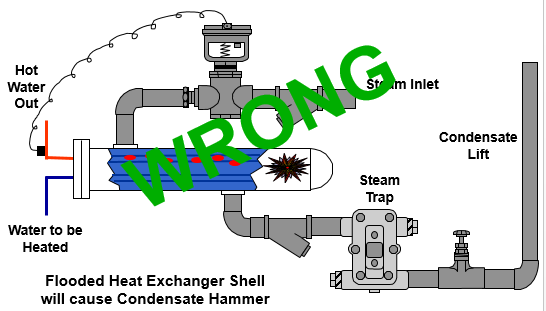 Another argument I often hear centers around load. There are those who argue that the load is reduced when the control valve is throttled which gives more pressure to lift.  This argument is similar to playing roulette. Once in a while you may win, but if you lose, the cost is non-warranty damage to a heat exchanger bundle. A pretty high price to pay for gambling. A simple scenario where you lose the bet is the startup load.

Seasoned steam plant operators know that when the steam system is first started up in the fall, steam pressure does not build up until the piping and equipment are up to saturation temperature. All the steam entering the pipe is immediately condensed as the pipe heats up. If your system has a 12” diameter shell and tube heat exchanger at 5 feet long, it will take about 5 pounds of steam to heat it up. This does not include any piping, the bundle, or the water.  Five pounds is a little over half a gallon of condensate, which is twice the volume of the 14” with a 2” condensate pipe before the trap. In this case, you lose the bet. Condensate will back up into the heat exchanger.