ASME is best known for improving the safety of equipment used in manufacturing and construction particularly boilers and pressure vessels. 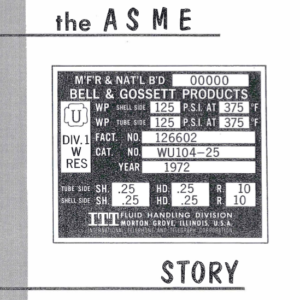 The first edition of the Boiler and Pressure Vessel Code (BPVC) from the American Society of Mechanical Engineers (ASME) was published in 1915 to establish standards (rules) for design, fabrication, and inspections of boilers and pressure vessels with the intent to provide protection of life and property.

Boiler catastrophes during the late 1800’s and early 1900’s were frequent. Literally, thousands of boiler explosions occurred, some of which resulted in deaths prompted the need to improve public safety. One of the most catastrophic failures, which truly brought to light the need for standardized laws, was the boiler explosion that occurred at the Grover Shoe Factory in Brockton, Massachusetts in 1905. That incident resulted in numerous deaths and injuries as well as completely leveled the building. Out of this was born the ASME standards still used today to protect the public against such accidents with pressure retaining equipment.

In commercial and institutional applications, ASHRAE, as well as most codes, require the pressure vessel carry an ASME stamp. This assures the owner and the owner’s insurance carrier that the vessel was inspected by an independent appraiser and registered with the National Board.

Review the related information from Xylem Bell & Gossett detailing more of the ASME Story for your selection process with tanks.