There are multiple methods to vary pump speed in HVAC chilled water systems. A common method is the use of a differential pressure transmitter at the hydraulically farthest terminal unit. ASHRAE energy standard 90.1 indicates if this method is used with DDC controls, “the setpoint shall be reset downward based on valve positions until one valve is nearly wide open”.

This section has an exception if a) the system has less than 4 control valves; b) the flow rate above is less than that required by the equipment manufacturer of equipment served by the system. or c) the total horsepower (HP) of the pumping system is less than 75 HP.

Most chilled water systems employ variable speed pumping whether they are under 75 HP or not.

OHIO: As of the date of this blog, Ohio energy codes are based on ASHRAE 90.1-2007. This standard has a similar requirement of 30% wattage at 50% flow but only applies it to larger pumps. Pumps over 50 HP and 100 feet of head. The same exceptions apply.

The 90.1-2013 standard section 6.5.4.2 continues with the following requirement. “Where differential pressure control is used to comply with this section and DDC systems are used, the setpoint shall be reset downward based on valve positions until one valve is nearly wide open”. The exceptions above are still in play.

Michael Licastro of Xylem Bell & Gossett recently hosted a WebEx where he addressed the various control methods and this method of demand reset. Look at the two slide representations shown below. The first slide shows a control valve near the end of the system at full open with the resultant pump drive at 55 Hz or 92 % speed.

As that zone becomes satisfied and the control valve throttles, the DDC system drops or resets the signal to the pumps until another control valve is full open. 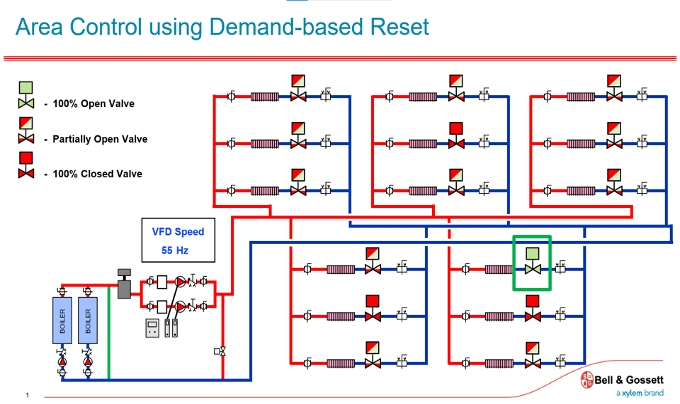 The second slide represents a system where a valve, closer to the pumping system is full open. The pump speed has dropped to 50 Hz. or 83% speed. 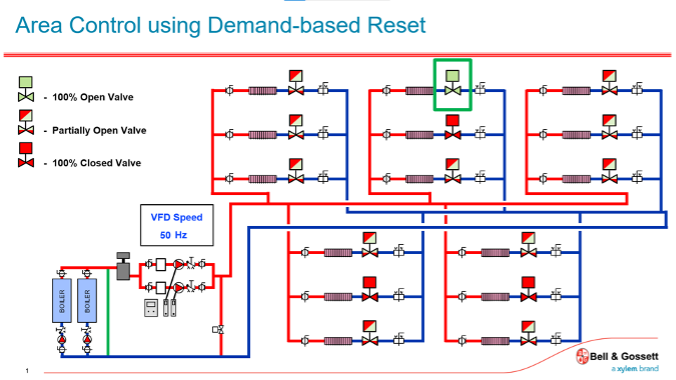 A Few Thoughts About This Method of Control

The standard indicates the DDC demand reset is employed where the differential pressure sensor (DP) control method is used. I receive calls about this statement. If the DDC system is resetting the speed signal, why use the DP sensor? I am not an expert in controls so I cannot address the need in the demand reset programming. I can make a case for the DP used in the process of balancing and system startup.

The DP sensor, when at maximum, should result in a speed that provides the balanced pump flow rate at full capacity. This may not be the full pump or motor speed. The balanced pump maximum speed would be reduced to eliminate over heading or safety factor in the provided pump.

Another concern is the reaction time of the DDC system compared with the pump and motor and variable speed drive. We want to avoid constant quick changes in the pump controls. We do want the system to be responsive. I would suggest the controls can determine valve position at the speed of sound, but the pump cannot keep changing speed at the same rate. We should slow the number of demand reset changes sent to the pump and the percent change per demand.

Finally, the controls engineer understands the relationship between the valve signal and valve position due to slippage. There will also be a need to have some ± latitude to the signal as required by the controls.

The Benefits of Demand Reset

The complexity to provide the DDC demand reset can significantly increase the costs of the chilled water system installation and commissioning. The actual operating cost of this system will be significantly less. It will provide the lowest use of energy when compared to traditional area control (DP sensors) or curve control (pump quadratic formula control). When applied to larger systems as defined in the ASHRAE 90.1-2013 standard, the payback time with this control method will be very attractive.