‘Tis the Season for Condensing Boilers

We’re taking a one-week pause in our humidification series to mention condensing boilers. A physical plant operator for a school district recently called and asked why there was water coming out of the boiler drain. Our answer was, “those are the TEARS OF THE POWER COMPANY.”

This school district recently became the owner of two condensing boilers sold by R. L. Deppmann on a plan and specification project. In Michigan and Ohio, fall is a beautiful time of year. The trees are starting to change and football games are plentiful. The morning temperatures are in the low 40s and the days get to the high 60s.

Condensing boilers reach their highest efficiencies when operating at part load and when they are condensing. The condensing boilers sold by Deppmann are set up to start condensing while seeing the highest possible return water temperature, which is at about 125°F to 130°F. And the fall weather is perfect for part load operation.

In our R. L. Deppmann seminars on boiler systems, we tell the story of the relationship between carbon dioxide (CO2) and oxygen (O2) in natural gas combustion and the firing rate turndown of boilers.

So, how do we get condensing to take place? It’s all about the dew point of the products of combustion and the temperature of the heating hot water back to the boiler. If we can get the return water temperature below the dew point of the flue gas, we can get the vapor in the flue gas to condense. This condensation contributes 1,000 BTU per pound of condensate transferred into the water (at no additional natural gas use or cost!).

So, there are two key things we have to look at: The return heating hot water temperature and the dew point of the flue gas.

The Roles of Oxygen and Carbon Dioxide in Condensing Boilers

If a boiler needs additional excess air (oxygen) for stable operation, it will not start condensing until the heating hot water return temperature gets much lower than what the boiler efficiency charts show. Depending on the reset schedule, you may own a boiler that never condenses. 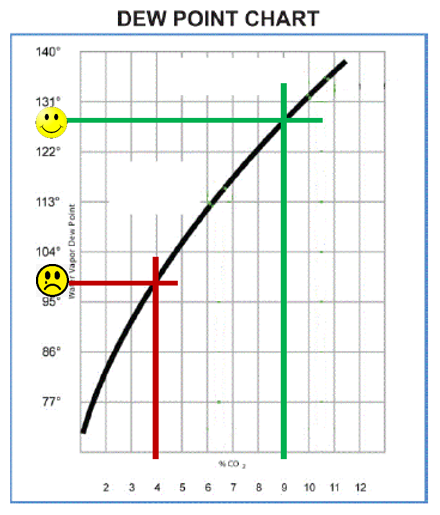 The good news is that we represent Aerco, Bryan, and Laars condensing boilers, and all of them have the better condensing temperatures. So
IF you bought your boiler from Deppmann, sit back and watch the TEARS OF THE POWER COMPANY IN THIS SEASON OF CONDENSING BOILERS. If you bought the other brand, just keep waiting.