When looking at Bell and Gossett pump selections, we often find higher part load efficiency (PLEV) pump choices are to the right of the BEP, or best efficiency point. How close to end-of-curve should a prudent engineer choose? 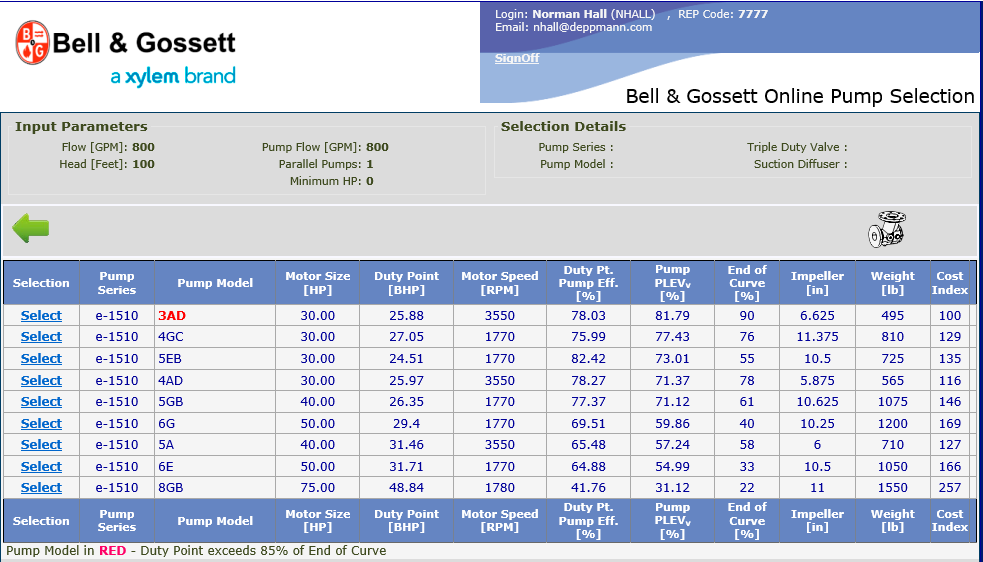 The following shows a Bell and Gossett selection table sorted on PLEV, or part load efficiency value. The most efficient part load selection is the e-1510-3AD with a PLEV of 81.79. This selection is 3500 RPM and not the traditional 1750 normally scheduled. That 3AD selection also shows it is 90% of end-of-curve (EOC). How important is EOC?

Is It Safe to Select Pumps to the Right of BEP?

ASHRAE suggests pumps be selected between 66% and 115% of BEP. In this example, the ASHRAE satisfactory range is between 473 GPM and 824 GPM. This selection meets that criteria. 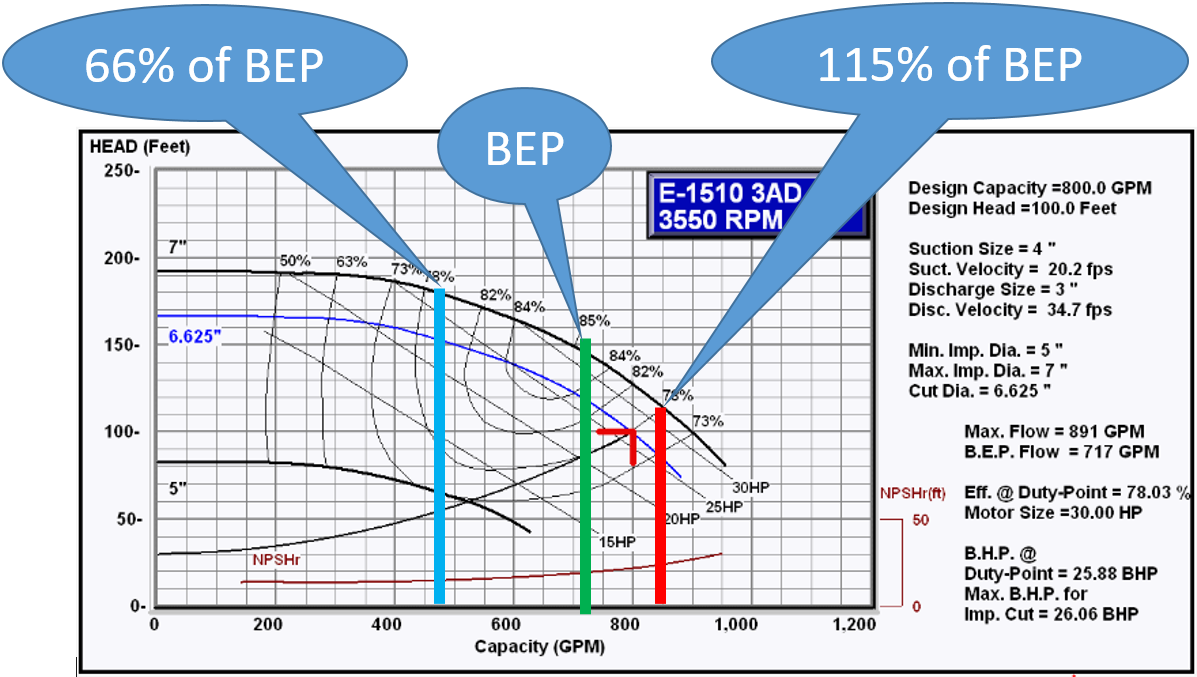 ASHRAE’s selection criteria is concerned with the operating efficiency of the pump selection. Of course, efficiency is important, but concerns about running off the end of the curve are even more important.

When ASHRAE suggests a maximum of 115% of BEP, there’s the assumption that you selected the head of the pump exactly with no guesses, rounding up, or “rules of thumb.” There’s also an assumption that there is no safety factor. What effect might these things have on a pump too close to EOC (92.5% in this example)?

Here’s the same curve showing a control curve of 30% of design head and variable speed.

Where would the operating point be if 15% were added for a safety factor and 20% overestimate of pump head? 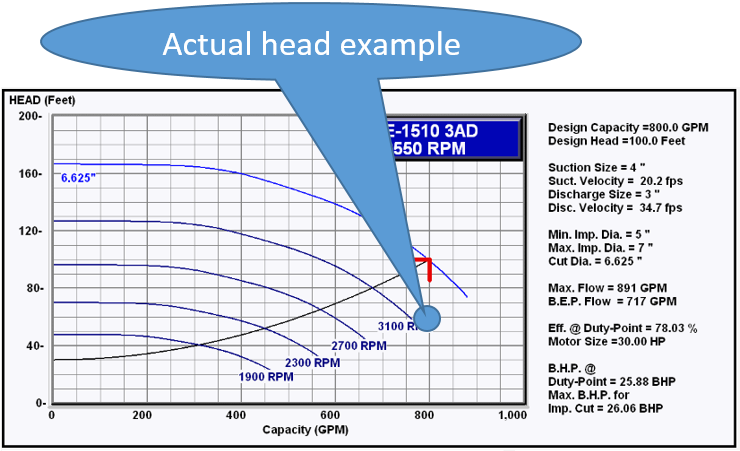 This selection is off the curve at design flow rate!

Another issue is the balance of the system. Engineers often specify 10% balance tolerance, so many of the balancing procedures start with the pump at 110% of design flow, and the discharge triple duty valve or speed is raised to maintain that point during balance. It’s not unusual when the balance is complete that the speed is never adjusted or the impeller trimmed as ASHRAE suggests in the 90.1 standards. This makes the selection go even farther to the right.

Diversity is the expectation that all control valves on terminal units will not be open at the same time. When using diversity in the design, the pump GPM is lower than the total of the terminal units. What happens when there’s a system startup or night/weekend setback and there’s a call for the system to change room temperatures all at once? Diversity disappears as all the valves go open at once. Again, a chance to move farther to the right of design.

Finally, there’s the assumption that the controlled system curve remains stable during operation. Many articles have shown control curve shifts under various combinations of 2-way operation. Some of those shifts cause the control curve to drop and operate with more flow and less head than design. Again, this moves the operation to the right on the pump curve.

All of these possible outcomes should be weighed when deciding whether to move to the right of BEP with your selections.

When tempering pump part load efficiency with the possible unintended operation points, we suggest standardizing on selections at 85% of EOC or less, unless more analysis of a possible system curve drift is reviewed. This seems to be a comfortable compromise between the old sage statement of “always select far left of BEP” and the newer cry of “efficiency trumps all.”

Next week we’ll conclude this series on Bell and Gossett PLEV with a few comments about part load and part flow.