How to Pick an HVAC Centrifugal Pump Part 9: Over Speeding HVAC Pumps & Motors

There are times when slightly more capacity or a little more safety factor is needed from a pump selection. Often times we are asked about increasing the speed of the motor above the nameplate rated RPM. This week the R. L. Deppmann Monday Morning Minutes looks at operating the pump above the rated RPM speed using a variable frequency drive. 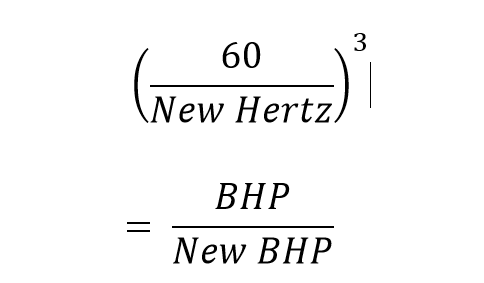 Operating an HVAC Centrifugal Pump above 60 Hz for more capacity

Operating an HVAC centrifugal pump at a higher speed than the pump curve indicates provides several enticing advantages. The first reason is to gain additional capacity from the pump. In this scenario, an existing pump producing less flow or pressure than required. In recent years on a constant speed pump application, the contractor would request a price to provide a larger impeller to gain that added capacity. Today, we might accomplish the same result by increasing the speed of the drive. The analysis used is similar to the reduction in speed to simulate the trimming of an impeller. It all starts with the Pump Affinity Laws.

The pump affinity laws shows us the relationship between flow, head, speed, and horsepower required for our closed hydronic systems. In the R. L. Deppmann basic pump seminar series, we spend a lot of time showing the relationship between these capacities using the laws. One mantra frequently heard in our offices is, “twice the flow needs four times the head.” The same holds true for motor speed. Using the pump affinity laws shown below, I could shout out loud. “Twice the speed gives twice the flow: Twice the speed gives four times the head: Twice the speed requires eight times the horsepower.”

Bell & Gossett recommends a maximum increase in speed of 5%. There may be more of an increase available, but that would require contacting B&G to make sure there are no issues. As an example, let’s assume we have a closed chilled water system with a capacity of 600 GPM of water at 80 feet head. Let’s assume we selected a B&G e1510-4BD pump at 1770 RPM. How do the pump affinity laws work if we want to increase the speed by 5% using a VFD set at 63 Hz? 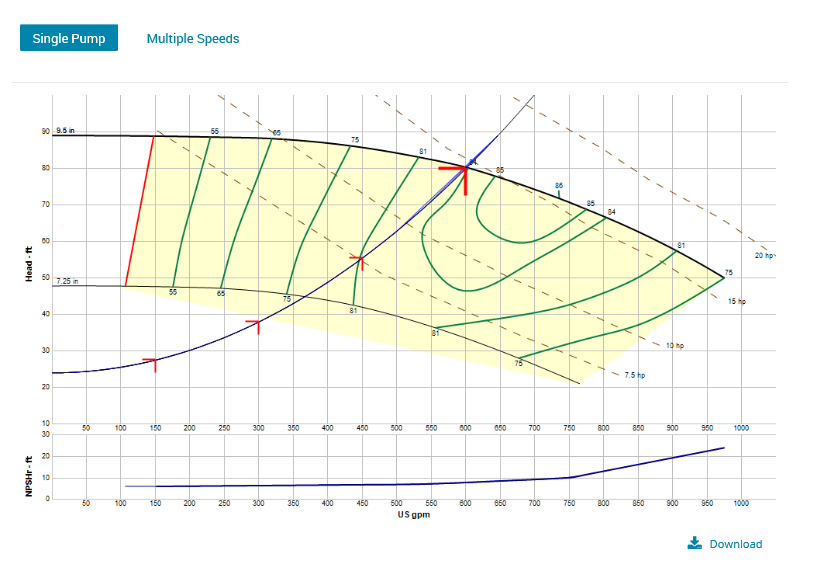 Based on this we would expect the potential capacity to be 630 GPM at 88 feet, but requiring 16.8 horsepower. Since the original selection would have a 20 HP motor to be non-overloading, the motor looks good. Let’s see what the curve looks like. 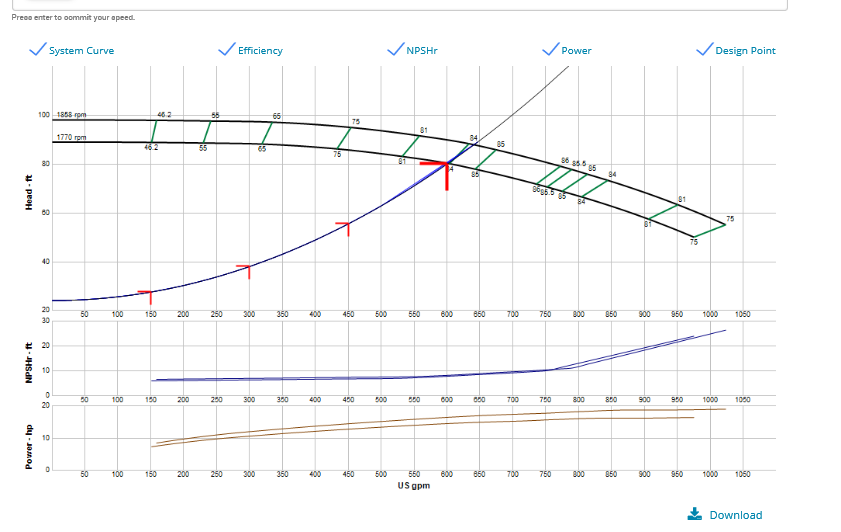 Limitations and Concerns at Higher Speed

The first concern is the drive and pump motor have to be rated for the higher amp draw caused by higher horsepower. If the amp draw is larger than the rating of the drive, the breaker or fuse disconnect will trip.

Another issue is the pump and motor bearings. Often times when a pump is available at a nominal 1800 RPM speed and also at 3600 RPM speed, the components inside the pump change. The change occurs because the work done by the pump could be larger. The changes are larger bearings, bigger shaft, different seal, and different coupler. When does this occur? There is no fixed answer. This is why you should check the B&G manufacturer’s representative whenever exceeding the 5% rule of thumb.

One last concern is the net positive suction head (NPSH) required by the pump. The NPSH increases at a greater rate than the speed. If we are over speeding a pump by more than 5%, we should check the NPSH available. Once we have the NPSH available, a safety factor is applied since the exact NPSH varies slightly with manufacturing tolerances and also due to entrained air in the hydronic system.  The example above is a low energy pump, the suggested safety factor is 1.3. As we change the speed of any pump, the energy of the pump may change and the suggested safety factor will also change.

Next week the R L Deppmann Monday Morning Minutes will examine how to specify and schedule the use of over speeding as a tool.

Read the Entire How to Pick an HVAC Centrifugal Pump series: