When selecting HVAC centrifugal pumps, the RPM or speed of the motor is an important choice engineers and designers make regularly. The default speed is normally 1750 RPM. The next two R L Deppmann Monday Morning Minutes will examine reasons why 1750 is normally the choice and the effects of other choices. 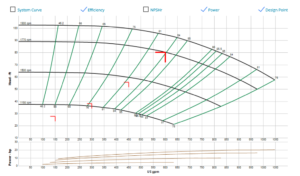 How does RPM (revolutions per minute) impact pump operation in a given application? And what RPM is best suited for hydronic applications? Let’s start by looking at the speeds.

Motor Speed and the Number of Poles

A pump’s RPM or “synchronous speed” is determined by the number of magnetic poles in the motor winding as they interact with alternating current power. Magnetic fields are induced in the stator or the part of the motor with copper windings. The rotor or the part with the shaft has an opposite magnetic field. As the magnetic field is changed in the stator, the rotor moves. Think of playing with two magnetics of opposite polarity. You can get one to move by moving the other without having them touch each other.  The number of “magnetic” poles in the rotor will determine its speed.

Pumps used for hydronic HVAC or plumbing applications include the following RPMs:

Actually, the motor will have a nameplate with slightly less speed than stated above. The industry may call a motor 1800 RPM or 1750 RPM and the nameplate might read 1770 RPM or 1765 RPM. These are all the same in our world. The reason can be stated simply or made very complex. The simple reason is that the magnets in the motor spin faster than the shaft due to bearing friction and torque or load. This difference is called slip. Older motors had lower efficiency’s than today’s premium efficiency motors so you will see older motors and older pump curves at slower speeds such as 1750 or 1735 while today, the motor may be run at 1770 or 1780 RPM.  The EPAC premium efficiency regulation increased the minimum efficiency which reduced the friction in the motor and increased the rated speed of the shaft. Hey, this is a pump blog so we’ll leave it at that for now.  Just note that when talking to HVAC people about the rated speed of a motor, different people may refer to a motor as 3500, 3600, 3550, 3565 RPM and they are all the same. 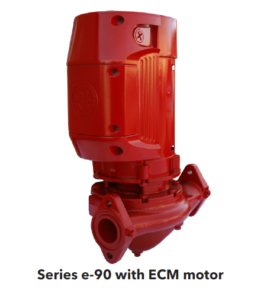 OK, I lied. Let’s look at one more important motor for HVAC Centrifugal pumps. Smaller centrifugal pumps may have an option of using an ECM or electronically commutated motor. The B&G series e90 centrifugal pump shown above has an unusual looking motor – it can utilize an ECM motor. The larger motors we normally use in the industry are induction motors, using the AC current to produce a magnetic field as described above. Producing the magnetic field to cause the shaft to rotate produces heat which reduces efficiency.

ECM motors have permanent magnets normally produced using rare earth. Since we are not producing a magnetic field, the efficiency of the ECM is higher than an induction motor. The challenge is size, the maximum ECM horsepower normally available today is around 5 HP. For this reason, ECM motors are normally only available on smaller pumps for smaller applications.  They are very prevalent in fractional horsepower pumps and fans. Unless we are willing to install and operate multiple pumps in series and parallel we are stuck with induction motors for our larger applications.

Next week we will look at pump flow, head and RPM in HVAC pump selections.