Let’s look at calculating PER values for pumps nameplated with the PERCL. The PERCL uses an equal percentage rating of measured or calculated input horsepower (IHP) at 100%, 110%, and 75% of BEP. Thus, 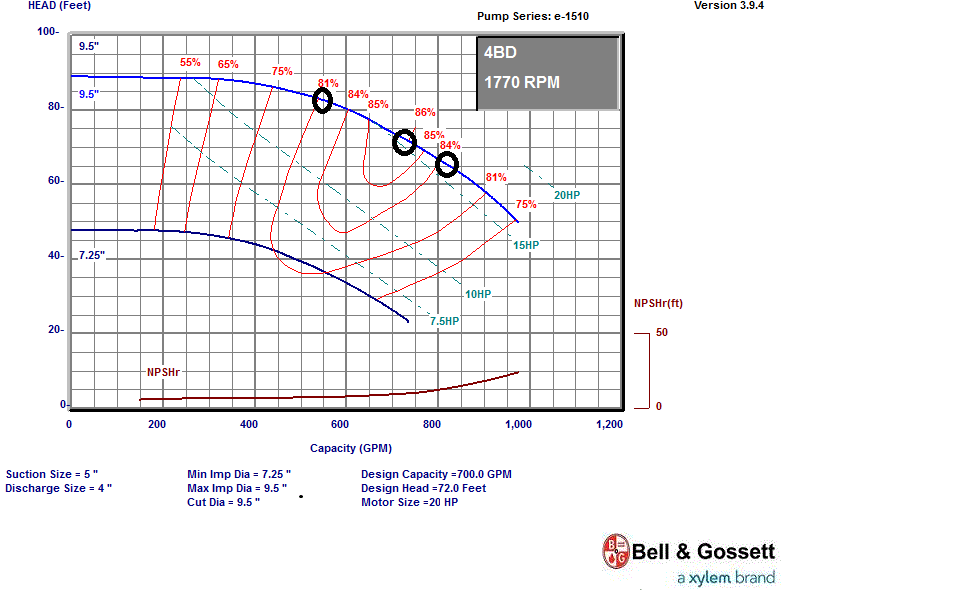 Let’s look at an example.

Pump manufacturers will have the option to rate their pumps based on constant speed, variable, or both. Here’s where it gets confusing. Notice that that the pump input power under constant speed and the pump input power under variable speed are both divided by the same number. This could be misleading if a pump is chosen based on its PERVL rating.

Obviously, the horsepower used by a pump with a properly applied VFD will be less than a pump without a drive. Since PEIVL takes into account energy savings with a VFD, it will always lead to a lower value than the constant speed rating. That doesn’t mean the pump is comparably efficient to other pumps in a constant or variable speed application. In fact, a pump with a PEIVL  may not even make the DOE’s cut as constant speed pump, but because it meets the efficiency standard when used with a VFD, the manufacturer can continue to make it.

For that reason, we recommend only looking at pumps that have achieved the higher certification – PEICL. If you’re going to include any reference to PEI in your specification, we recommend you use the following: Pumps supplied shall meet and be nameplated with the PEICL  requirements of the U.S. Department of Energy (DOE) Energy Conservation Standards for Pumps.

Additionally, if a manufacturer says a pump meets the VL standard, it must supply the VFD with the pump. Thus, the owner cannot choose any other brand of VFD; it must be the VFD and controls with which the pump has been rated.

So the best way to guarantee optimum efficiency is to only choose CL-rated pumps, regardless of whether the pump is to be used in a variable or constant speed application.

But is this the best way to measure a pumps true efficiency when being applied into an HVAC system? Stay tuned for our next article for a better way to measure pump efficiency by taking into account real part load operation.