Once in a while, we still see the two pipe heating or cooling system with a manual or automatic changeover process that the owner uses to switch between seasons. I’ve been called out to troubleshoot over a dozen systems where the owner is left to their own device to change the system over. The maintenance man retired and the new person did not get the training required. A couple of simple controls in the primary/secondary hydronic system can make all the difference ensuring the correct operation of this system.

There are times when the owner does not want to invest the capital in a combination heating and cooling system sometimes called a four-pipe system. The two pipe system design provides heating in the winter and cooling in the summer. The changeover may occur automatically based on the changing outdoor air temperature but usually, these are manual changeover systems.

There are two concerns and I have experienced both of these many times when called out for troubleshooting. The first is the challenge of sending hot water to the chiller. The changeover has to happen when the hydronic system water temperature is low enough for the chiller being used.

The second issue concerns air cooled chillers that are drained in the winter. Once the heating season is done and cooling is required, there is a tendency in the real world for the owner to simply open the valves and allow the closed-circuit system water to fill the piping to the chiller. This introduces a great deal of air in the system which can cause issues for weeks. 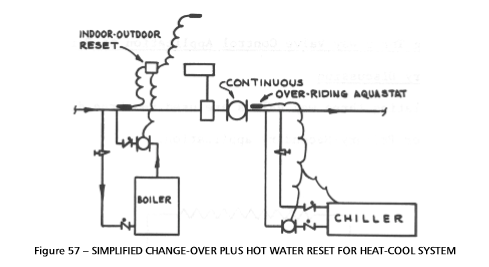 In the winter, the chiller is off. The boiler operates off of the normal heating controls. Note that the system pump is pumping away from the location of the expansion tank or point of no pressure change.

The system includes some simple controls for when we change over to cooling. In the cooling mode, we shut down the boiler. The system pump continues to pump and the supply temperature of the water starts to drop. The aquastat in the secondary loop senses the temperature and when the temperature drops to a value that is safe for the chiller; the chiller pump then starts. Once the flow is proved through the chiller controls, the chiller may be activated.

What if the Chiller is Drained in the Winter?

It’s not unusual to find hydronic systems with air-cooled chillers. In a two pipe system with heating or cooling, but not both, something has to be done to prevent freezing of the chiller piping in the winter. Sometimes the system is filled with a mixture of Dowtherm or Dowfrost glycol. This would mean the entire system would have to be glycol unless a separate heat exchanger was used. The loss in heat transfer efficiency could be large. Most of the time these chillers are drained using shutoff valves inside the building. When the owner is ready to activate the chiller, they have to fill the piping.

My experience includes many owners who simply opened the shutoff valves and allowed the hydronic system water to fill the chiller piping. What happens to all the air in the pipe? It ends up going into the system and possibly finding its way to the terminal units. Cooling problems will occur. 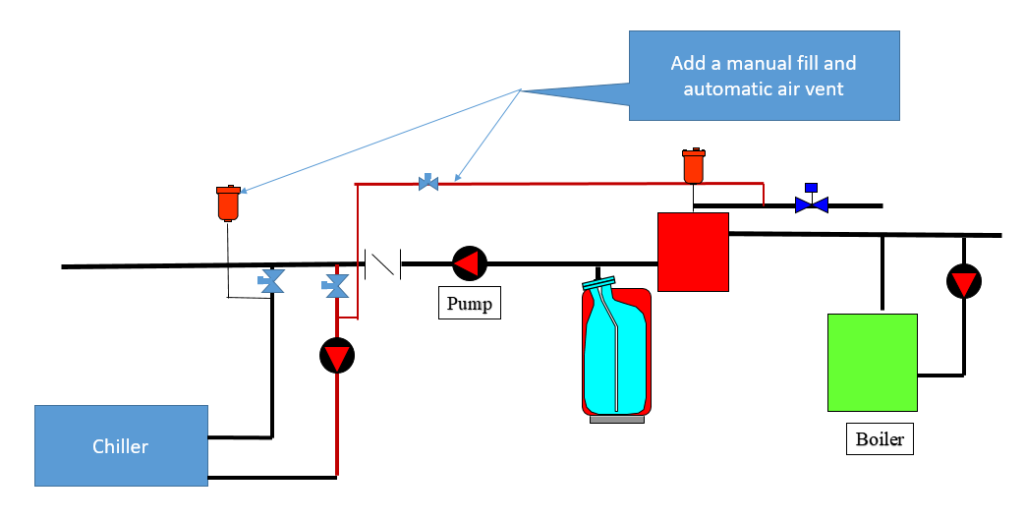 The better solution is to install a manual fill and an air vent. Written laminated instructions on the wall will include the sequence of opening the manual fill valve and filling the system with water for “X” minutes. Once it is complete, close the manual fill and open the shutoff valves. Now flip the chiller pump and chiller to the auto position and begin the changeover process.

This simple use of primary/secondary piping is just one of the many applications that Bell & Gossett covers in their technical manuals and training programs. If you are interested in attending a class on this subject or learning more about changeover systems, just contact your RLD sales engineer or your local B&G representative.