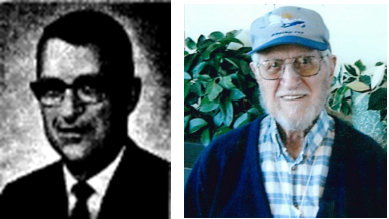 It is with mixed feelings that I convey the news that Burwell J. “Bucky” Walters passed away on Feb. 5, 2016 at his residence in Traverse City, Michigan. The mixed feelings come from the sadness of his passing, mixed with the joy of knowing that he enjoyed the full 106 years of his life. We will keep Bucky and his family in our prayers.

Bucky Walters was the 8th employee of the R. L. Deppmann Company. Ray Deppmann hired B.J. in the fall of 1938. He was a young graduate engineer from the University of Detroit with less than two years’ experience at Minneapolis Honeywell.

Ray Deppmann started R. L. Deppmann Company in 1927 as a controls company, selling damper motors and other boiler controls. In 1929 Ray began selling Bell and Gossett pumps, although the majority of the Deppmann business was the sales and installation of controls. By 1938 the effects of the Depression were waning, and Ray’s friend E. J. Gossett suggested that it may be time to add an outside sales person for only B&G products. This made Burwell Walters the first B&G sales person for R. L. Deppmann Company.

In 1945 growth in the Grand Rapids Michigan area led to expansion of the Deppmann Company. The same year, Walters moved to Grand Rapids and started a branch. He worked from his home the first year, and then opened an office on Cherry Street in GR.

Bucky was very active in the ASHRAE throughout his career. He joined ASHRAE on Feb. 28, 1945 when he moved to GR and became a life member in 1995. He was active in starting the Michigan State University Hydronic Conferences, which began in 1966, and the conference attendees list represented a Who’s Who of the engineering community in Michigan at the time. The classes were taught by Gil Carlson, Stan Tupper, and Frank Gall from Bell and Gossett. All familiar names that, literally, wrote the book on hydronics.

Walters and his son Chuck recall the annual employee and customer parties at the Deppmann 700-acre farm in Saline Michigan. “Softball, fishing, swimming, hayrides, good food, ice cream, pop, and beer all contributed to great fun for adults and kids”.

In 1955 Bucky discussed company expansion with Ray Deppmann. In 1956 Ray relocated Ray Hurlbutt to start the Saginaw branch, and hired Zaven “Ziggy” Margossian, later RLD president, to call on the engineering community in Detroit. Later that year, Walters, motivated by more management duties in the company, hired his first outside sales person, Robert Whymer, who later became the Grand Rapids branch manager and president of the R. L. Deppmann Company.

Many employees in all branches of the company remember Bucky’s sense of humor. A rite of passage for new employees at Deppmann was an encounter with Walters at the annual company Christmas party. He had a fake set of google eye contacts that seemed to move in all directions at once. He would wear them as he was introduced as a leader in the firm to all new employees. Many fun moments were enjoyed by Bucky as the uncomfortable “fresh meat” tried desperately not to look at “the eyes”.

Burwell a former Deppmann officer, Board of Directors Member, and owner, retired from the company in 1978. In a recent conversation about the invitation to the summer employee party, I recall his comments; “There are only 5 of the 69 employees who would remember me. I would still like to come, but my mental state says come, and my physical self just can’t make headway anymore; besides, my kids and grandkids don’t like to drive that far”. That’s when you know you have lived a long and fruitful life. We will miss Bucky, but now God has to deal with “the eyes”!